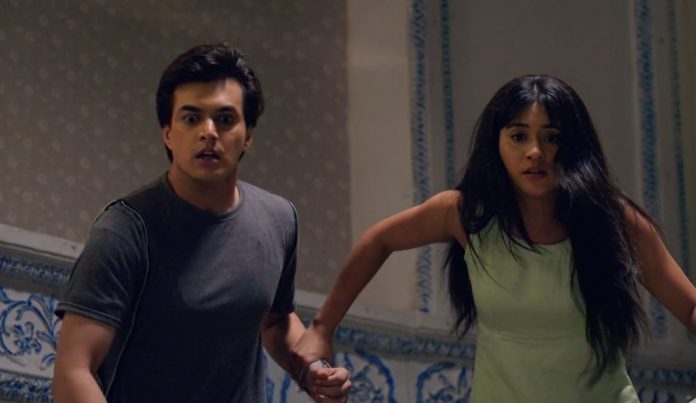 Yeh Rishta Cursed Kartik faces huge challenge Kartik arrives at Naira’s place with lots of gifts and balloons. He wants to surprise Kairav. He finds Kairav already celebrating with Naksh. Naksh tells Kartik that Kairav was missing him and was too upset since the morning. Naksh doesn’t know the real reason for Kairav’s sorrow. Kartik knows Kairav loves him a lot, since Kairav was coming from Goa to meet him. He hugs Kairav and tells him that he loves him a lot. Kairav isn’t happy seeing the gifts. He has seen Kartik fighting with Naira and venting anger on her. He believes that Kartik always scolds Naira like a bad person. He doesn’t want to go close to his dad. He runs to Naira again. He tells Kartik that he wants to be with Naira.

He wants their fights to end so that he gets happy. Kartik asks Kairav if he has some fever and wants to stay away. Kartik and Naira behave friendly. Kairav thinks they are pretending happy in front of him. He gets many thoughts in mind and assumes Naira is hiding her sorrow again. Kairav’s annoyance turns into hatred. He hides the torn photos of Kartik in time. Kartik will be soon learning the hatred twist affecting Kairav’s happiness. He realizes his dream about Kairav’s hatred turned true. He feels cursed to lose his son’s love, knowing it gets tough for any parent to bear a child’s hatred. How will Kartik pass the big challenge and win back his son? Will Naira find the troubling cause and resort it in time? Keep reading.

Muskaan:
Ronak gets nervous thinking of his first night. Hanumant asks him to take his advice and makes him chant Om for a while. He teases Ronak and runs away. Ronak sees Muskaan and pretends to continue the Jaap. Muskaan tells him that Lovely likes Surender, they should support her in getting her love, since her happiness matters a lot. Sir ji roams around the house and keeps an eye on everyone. Sir ji makes an excuse that he is finding the washroom. Ronak finds Gayatri worried. He asks the reason. She misses Sir ji. Ronak tells her that Sir ji didn’t keep any duty of husband and father. He consoles his mum. She promises to never cry for Sir ji.

Muskaan and Ronak keep the Karwachauth fast. Muskaan breaks her fast. Ronak gets dizzy. Muskaan learns that he has also kept the fast. She breaks Ronak’s fast. Ronak tells her that he will always support her. Ronak tells Gayatri about Lovely and Surendar. They decide to unite Lovely and Surendar. They give her shagun and approve her relationship. Lovely refuses to them. Lovely tells them that Muskaan misunderstood her and is making her life difficult. She tells them that she had promised to support Muskaan, but now she will be leaving the house. She spoils Ronak and Muskaan’s happiness. Sir ji gets a new plan on his mind.

Muskaan gets arrested in Lovely’s suicide case. Muskaan wants to meet Ronak. It gets shocking for entire family. Ronak and Hanumant try to help her. Muskaan fell in Lovely’s trap. Lovely and Surendar were fooling Muskaan. Lovely commits suicide. Sir ji entered the house with vicious intentions. Ronak is worried for Lovely’s loss. He tells Muskaan that he will never leave her. Muskaan tells Ronak that she is responsible for Lovely’s suicide. She sinks in guilt. She feels she has been wrong and broke the promise made to the family. Ronak asks Muskaan to believe in herself and try to recall something that could help them find the truth.