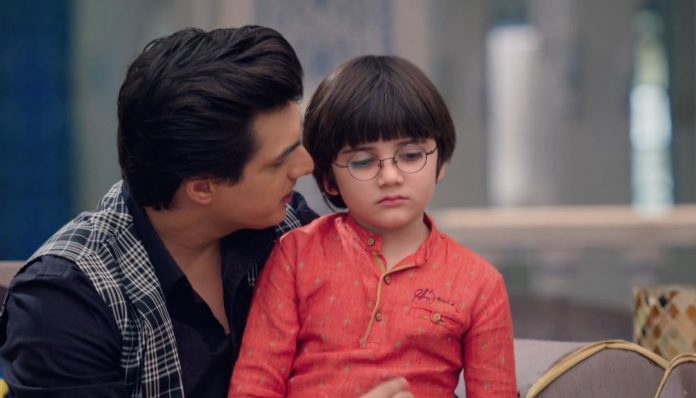 YRKKH Huge blast Kairav ruins birthday celebrations Naira gets Kairav to Goenka family on his birthday. Entire Goenka family welcome their heir with love. Kartik showers many hugs and kisses. He loves Kairav a lot. Everyone hugs Kairav and wishes him for his birthday. They are geared up to celebrate for Kartik and Kairav’s birthday. Kartik makes sure that Kairav gets happy seeing the disney characters coming to life just for him. He plans the disney theme to cheer Kairav. He fulfills Kairav by turning the house into Disneyland. Kartik and Kairav dance and hug. Kartik asks his family to click their picture. They have their clothes color coordinated.

Kairav is upset with Kartik and expresses his annoyance in the party during the cake cutting ceremony. Kartik surprises Kairav with a rainbow cake. He turns Kairav emotional by his speech. He tells Kairav that they both can relate with it well. He tells them that he met Kairav during the fair, when angel gave his number to Kairav. He tells how destiny and time united them. He tells that Kairav saw rainbows and lotus when they met. He shows the rainbows and lotus flowers to Kairav. Kairav doesn’t smile. Kartik asks Kairav to cut the cake. Kairav turns angry and ruins the cake completely.

He gets shouting and crying, much to everyone’s shock. Kairav spoils the party and expresses his anger on Kartik. Kartik hugs him and wants to know the reason for his frustration. Kairav doesn’t open up his feelings. Naira takes an initiative to lessen the tensions for Kartik and mend things.

Nimki Vidhayak:
Shukla threatens Mintu about his Dadi. He tells Mintu that he will kill his Dadi and also his friends. He compels Minty to do his work. Nimki tells Ganga that she is supportive of her. Ganga tells her that they have to wait before getting much success. Abhimanyu informs Nimki about Mahua and Tunne coming home. Nimki makes the excuse of family matter. She takes Ganga’s help and rushes home. Nimki meets Mahua and Tunne. She wants Mahua to get some sense.

She asks Tunne why didn’t he save himself. Mahua thanks Abhimanyu for helping her. Nimki insults Tunne. Tunne feels he couldn’t take care of Mahua. He asks Mahua to stay with Nimki. He accepts his mistake. Nimki asks Mahua to come home with him. Monu gets happy and unites with his sisters. Nimki asks Tunne to come along. Ganga wants to fix Parag’s alliance. She tells Surekha that she will celebrate Diwali. She wants to talk to Tyagi.

Mishra is happy to get more ministers in their party. Parag asks Ganga why didn’t she inform him about her decision. Ganga is just fooling around Nimki. She tells Mishra that Nimki won’t matter to her once she gets power in hands. Parag refuses to marry a simple girl like Simran. Nimki asks Mahua to settle down well. Nimki acts rude towards Mahua. She wants Mahua to get independent and self sufficient.