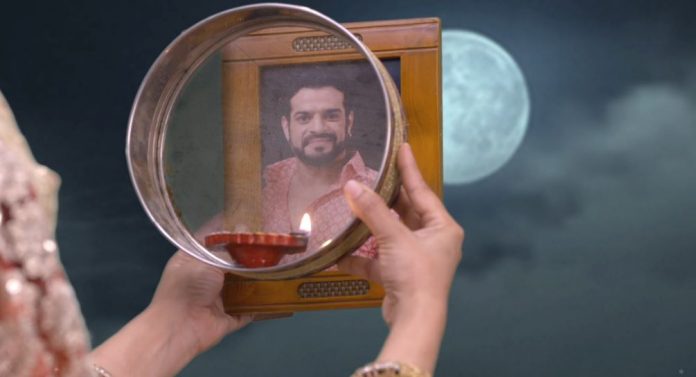 Yeh Hain Mohabatein Raman Twisted identity jitters Raman is thankful to Ishita for helping him escape from Natasha’s sight. Natasha doesn’t know that Raman has left from the house. She attends the Karwachauth Katha ceremony. She waits for the moment when she can go to Raman. She tries to find Raman and gets confronted by Ishita. She makes excuses to deal with Bhallas. She fails to find Raman anywhere in the house. Her plans to break her fast with Raman aka Shardul fail. She loses her cool. She feels Ishita has hidden Raman somewhere. She creates a scene in Bhalla house before she gets ousted. Tara feels embarrassed because of Natasha. She forcibly gets Natasha home. She bears Natasha’s anger.

Ishita calls up Raman to inform that they have got rid of Natasha. The Bhallas pass the time and wait for the moon sighting to break their fast. Ruhi badly misses Aaliya. She wanted Aaliya to celebrate Karwachauth with them. Ishita tells Ruhi that they have to adjust with the fate, life doesn’t go as they want. She connects to Aaliya and advises to break the fast on time. Aaliya misses the family. Ishita is hopeful that the family will have harmony soon.

She heads to the terrace to break her fast, along with the family members. Raman rushes home to celebrate Karwachauth with family. He witnesses an accident. He tries to help the injured man. He falls into trouble. He gets interrogated by police. He fails to prove his innocence. Raman faces an arrest. He wants to inform Ishita about his arrest. The couples celebrate Karwachauth and complete the fast by observing the moon. Ishita gets Raman’s photo to break her Karwachauth fast. There starts a debate about Raman’s old and new face. Ishita tells them that Raman’s heart matters to her, his face doesn’t matter. She tells that Raman will always be same for her. She doesn’t want anything to judge her love for Raman.

The family agrees with her justification. Raman fails to break Ishita’s fast. Ishita defends Raman and completes the rituals. Aaliya and Yug miss the family while they carry on the rituals. Elsewhere, Tara is madly in love with Sunil. She keeps the fast for him. Natasha commands her to leave the house. She is angered that Tara failed her plans. Tara asks her why was she creating the unwanted drama. Natasha doesn’t tell her plans. She wants Tara to get lost. Tara wants Sunil to support her. Sunil gets troubled when Tara sheds tears.

Tara breaks the fast herself and angrily leaves from Natasha’s house. Sunil feels much sorry for Tara. Natasha reminds him their huge plans to kidnap Raman and get the diamonds. She doesn’t want Tara to pose problems. Ishita and Ruhi try to find Raman. She wants to know if Raman is fine. They rush to file the missing report at the police station.

They can’t believe it when they find Raman on lock up. Raman tells them about the accident case slapped on him. Raman pleads innocence. Ishita tries to get him released. Ishita asks the inspector to bail out Raman and wait for the injured man’s recovery to take his statement. Raman is sure that his name will be cleared from the accident case. Natasha calls up Arijit to know about the kidnapping plan status. Raman gets saved from the police, but lands in Arijit’s trap.