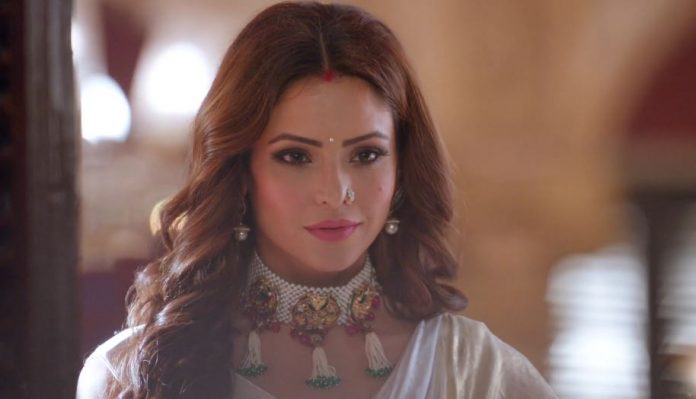 Kasautii Star Plus Komolika kills Prerna Komolika pacifies Mohini. She tries to appear good in front of Basus. She wants even Moloy to support her. She knows this can happen only if she wins Mohini. Mohini is happy that Anurag has married a nice girl. Komolika seeks their help to settle down in Anurag’s room. She tells them that she is new in the family and doesn’t know much about them. Mohini asks Nivedita to help Anurag’s wife. Nivedita obeys Mohini. She is happy that Anurag’s life got saved. Komolika recalls the insult done by Nivedita. She wants to take revenge on Nivedita and everyone else in the family.

On the other hand, Prerna meets Anurag to bid him a farewell. She sheds tears while missing their union moments. She tells him that she is sorry to decide this alone. She is helpless that he doesn’t remember her. She wanted to keep her promise and share everything with him. Since he isn’t in his senses, she doesn’t involve him in his decisions. She hugs Anurag and cries. She tells him that she will wait for him, so that they can unite again. She doesn’t want to compel him to recall her by seeing her in the house. She doesn’t want to risk his life in any way. She wants him to stay fine and happy with his family.

She thinks destiny is making her sacrifice her love once again. She decides to leave from his life just to save his life. She informs Mohini about her decision to leave from Anurag’s life. She tells Mohini that she loves Anurag a lot and can never risk his life. She wants Mohini to take care of Anurag and help him recover soon. She doesn’t expect anything from Basus. She tells Mohini that she just wishes Anurag’s happiness. Mohini gets emotional, but is thankful that Prerna is finally moving out.

Prerna asks Anupam to look after Anurag in her absence. She gets sinking in her heart after losing Anurag. Mohini feels that everything is happening for the good. She still stays selfish and hates Prerna. She wants Prerna out of her house. Nivedita thanks Komolika for saving Anurag. Komolika doesn’t want to forgive her. She promises to make their life hell. She finds a way to insult Prerna once again. Prerna doesn’t share the truth with Komolika, unaware of her identity.

Komolika feels like a winner, that Prerna has left the house. She just wants to be with Anurag and win his love. She thinks to kill Prerna. She doesn’t get a second thought. She takes the big step to kill Prerna and get rid of her. She then finds another way and insults Prerna. Komolika spares Prerna’s life, since she feels she has already killed Prerna’s soul, her love and happiness. Prerna returns to Sharma family. Shivani reacts angrily and vents anger on Moloy and Mohini. Prerna gets hopeful to get Anurag back, despite being aware of his amnesia.