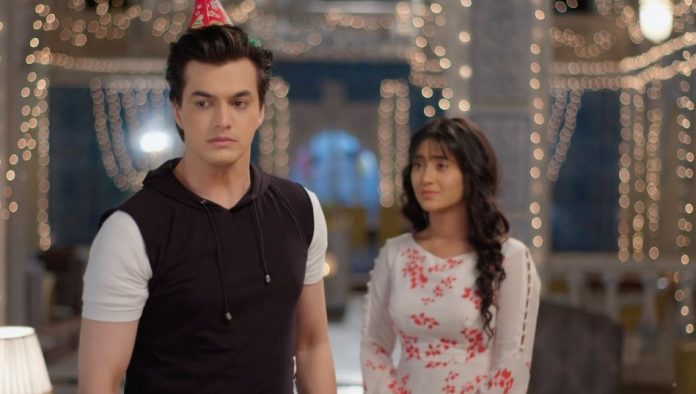 StarPlus YRKKH Kahan Hum Prime Shows Spoilers Kartik gifts a pretty dress to Naira for the party. Naira decks up again for the sake of Kartik. Naira and Kartik surprise Kairav with a great birthday party. Being a talented dancer, Naira performs happily to double the fun. Kartik hugs Kairav and wants to make sure that Kairav gets extreme happiness. Naira finds Kairav not responding to Kartik. She gets worried when she finds his behavior turning more weird in the party. She doesn’t understand him. Kartik becomes a kid with Kairav. He jumps on the trampoline and gets Naira along. He asks Kairav to join them. Kairav feels Naira is faking her happiness just for his sake.

He is much angry on Kartik. He doesn’t want his mum to live under Kartik’s fears. He reacts impulsively in front of the family and guests, and expresses his hatred towards Kartik. Kartik gets aback by the unexpected twist. Kartik ruins the cake and shouts that he doesn’t want to celebrate his birthday with his dad. He hugs Naira. He avoids Kartik completely. He doesn’t want to forgive Kartik easily. Kartik slips in shock seeing his shocking behavior.

Sonakshi makes a grand entry in her Sangeet. She becomes the Royal Bahu of Sippy family. She wants to add star power to Sippys. Sukhmani is very happy for Rohit and Sonakshi. She calls the couple for a lovely dance performance. Rohit and Sonakshi perform romantically. Their family members join them as well and highlight the Sangeet with more fun. Mahesh is up to a new conspiracy. He starts creating misunderstandings between Rohit and Sonakshi. Sonakshi learns about Rohit’s lie. Rohit lied to her about Ravi being innocent and the real culprit still being hunted by the police. She gets much disturbed and afraid again.

Rohit didn’t wish her to lose her happiness on their special day. He has a reason to hide the matter from her. Rohit explains Sonakshi about his move. Sonakshi gets upset with him. They get into an argument. Sonakshi tells him that she deserves to know the truth. Raima overhears them and feels Sonakshi isn’t right for Rohit. Raima asks Rohit not to upset Sonakshi. She tries to bring them together. Sonakshi is bit hurt, even though Rohit lied for her betterment. Sonakshi thinks Rohit didn’t keep his word to maintain friendship between them.