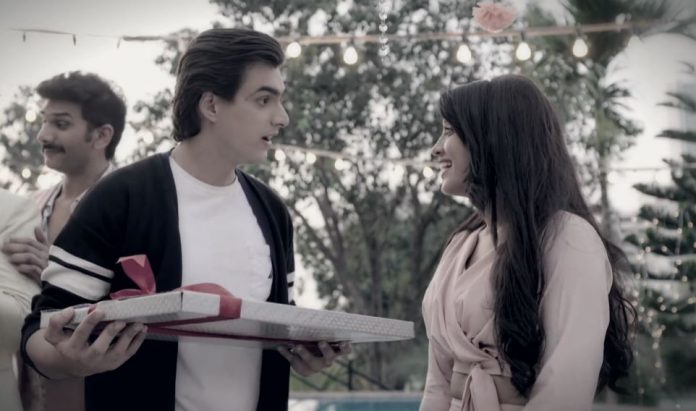 Star Plus Kartik Naira deal Kairav hatred anger Kartik and Naira dance for Kairav. They surprise Kairav like never before. Kartik expresses the father’s emotions in the best way possible. He takes Kairav in lap and dances with him. Kairav gets uncomfortable. He tries to get away. Naira spots his uneasiness. She knows Kairav loves Kartik a lot, since he was always willing to stay with Kartik. She doesn’t understand the reason for his weird behavior. She finds Kairav disturbed. Kartik and Goenkas have found this happiness after a long time. They hug Kairav and bless him, singing and dancing in their usual musical way.

Kairav becomes the star kid for a while. Kartik treats him with love. Kairav asks Naira to take him to the room. Naira wants him to be with Kartik. She thinks Kartik’s happiness shouldn’t get down sine its his birthday as well. Everyone isn’t aware of Kairav’s sadness. They get the pictures clicked and cheer for Kairav. Kairav grows more uncertain about his parents’ real happiness and fake put up. He wants them to be really happy together. Kartik and Naira’s madness and romance will be seen after a long time, in their romantic dance performance. Kartik organizes a magic show for Kairav.

He asks the magician to disappear Naira and show the trick. Kairav gets angered when he hears Kartik willing to get rid of Naira. He misunderstands Kartik’s joke and assumes that Kartik hates Naira so much. Kairav protects Naira. Naira finds Kairav unhappy within. She gets troubled by the thoughts that Kairav learnt about Kartik and her custody battle. She fears the storm striking Kartik’s happiness, attained after five years.

Sufiyana Pyaar Mera: Madhav introduces Rupali to Krish. She gets happy to meet her son. Everyone is worried for Nilam. Saltanat knows that Nilam is sensible and can’t take any wrong move. She blames Hamza for slapping Nilam and opposing her love. She tells Zaroon that if she was in Nilam’s place, she would have gone to meet Madhav. Zaroon wonders why is Madhav lying to them. She knows Madhav isn’t aware of Nilam’s presence, he would never lie. Rupali controls the family. She hugs Krish and fools him. Madhav thinks why is everyone so silent. He suspects Rupali. Saltanat and Zaroon track Nilam’s phone at Madhav’s house.

They rush there to find Nilam. They wonder if Nilam is in any danger. Rupali wants to move ahead with Madhav. Madhav refuses to her request. Krish plays with Indu. Nilam struggles to reach Krish. Krish finds her captive and helps her. She asks him about Madhav. Krish tells him that Madhav is with Rupali. Nilam takes Krish and runs away. She lights the crackers. Rupali fails to chant any spell on Madhav because of Nilam’s move. Saltanat and Zaroon look for Nilam. Madhav learns that Krish was inside the storeroom. He gets angry that Nilam has taken Krish.

Saltanat tells them that Nilam isn’t like Kainat. Rupali plays the emotional card. She tells Madhav that she wants Krish’s custody, since he isn’t able to protect her son. Indu supports Rupali, much to Madhav’s shock. Rupali asks him to sign the custody papers. She also reveals that Indu has transferred property to her. Madhav realizes Rupali has turned his family into her puppets. He understands her game.