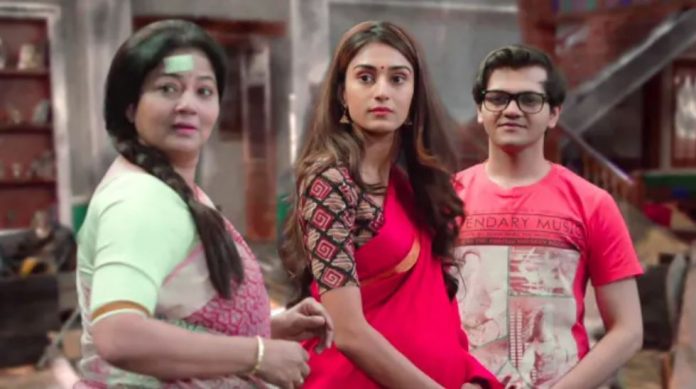 Kasauttii Starplus Prerna faces shocking accusation Anurag and Prerna get locked in the office storeroom. Komolika realizes that someone else got locked with Anurag. Prerna tells Anurag that if she names him, someone will definitely come to help him, since he is the boss. Anurag and Prerna have cute moments, which break by Komolika’s questioning. Komolika is ready to help Anurag, but takes time to know who is accompanying him in the dark storeroom. Prerna doesn’t tell her name and instead tells her work position that she is Anurag’s secretary. Komolika doesn’t suspect much and rushes to get the peon. She wants the door to be unlocked soon.

Komolika didn’t know her plan will fail this way because of the dust flow. Anurag scares Prerna further, which leads them into a romantic moment. Prerna controls her heart. Anurag gets flashes of his past and connects to her unknowingly. He recalls the story narrated by Prerna before. He narrates the same story of thorn birds, who sing melodious love songs by experiencing much pain. He tells her that he wanted to share it with her without any reason. Anurag visualizes Prerna and him, but is unclear that Prerna is the girl in his memories.

She worries for him. Komolika gets the door opened. Prerna asks Anurag to go out and avoid the suffocation. Komolika takes him along, while missing out to see Prerna again. Prerna fears that Anurag is pressurizing his mind to recall the past. She doesn’t want him to suffer again. She decides to leave the job for his betterment. Anurag finds it really weird that he has shared an unknown story out of nowhere, that too with his secretary. Komolika asks him more about Prerna. He doesn’t divulge more details. He tells her that he is just worried with some memory flashes appearing in front of his eyes.

Consequently, She decides to find out about the secretary, who is slowly reviving his memories. She goes to his office to find out. Prerna wants Anurag to accept the resignation. She fears that Anurag will not be able to accept the truth at once. She is ready to face problems. Ashish insults her on knowing about his resignation. Ashish meets Komolika. Prerna gets summoned by Anurag. Komolika enquires about Anurag’s secretary. Ashish informs her about Prerna. Komolika can’t believe this. She gets raging that Prerna didn’t leave the city and joined Anurag’s office to get back in his life. She learns that Prerna is with Anurag.

She tries to overhear their conversation. Anurag scolds Prerna for hiding the fact that she knew the story of thorn bird. He suspects that she has narrated the story to him in the past. He feels she understands him, but she is pretending. He wants to know the reason for her secrecy. Prerna comments on his memory loss, which upsets him. He gets rude towards her and then apologizes to her. He doesn’t find Komolika spying on them. Moreover, Komolika makes a plan to throw Prerna out of their lives. She takes Ashish’s help. She frames Prerna into a theft and wants her to land in jail. Anurag takes a stand for Prerna like always.