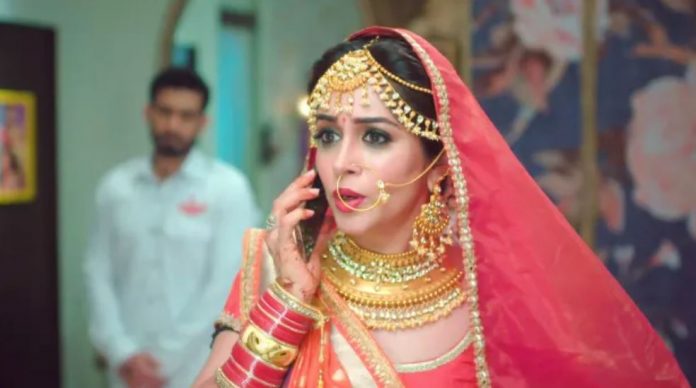 Kahaaan Hum Starplus Tonight Ronakshi wedding shocks Sonakshi gets decked up as the bride. She awaits the show crew to record the scenes soon. Mahesh gets the director and crew members fall into trouble by framing them in a fake accident case. He pays a drunkard to create a scene on the road so that he gets sympathy from public. Mahesh takes away the recording camera and dumps it without coming in anyone’s notice. The drunkard gets the public on his side and involves police to get the show crew arrested for the accident. Mahesh’s plan works well. He gets relieved that Sonakshi will leave from the house at any cost now and hence get away from her marriage with Rohit.

He wants to kidnap Sonakshi and marry her. Mahesh takes advantage of the situation well. He heads to Sonakshi to reveal about Netra’s further tensions. Sippys rejoice Rohit’s marriage rituals. They take the baraat to Rastogis. Rohit overlooks Raima’s misbehavior. Veena wants Rohit to get his dad’s blessings. She praises Naren to be the best husband, a perfect example of an ideal loyal husband. Rohit disagrees with her, knowing the truth of Naren’s affair. He doesn’t think he needs to learn anything from Naren and become like him ever.

Naren tells Rohit that things aren’t true as it appears sometimes. He asks Rohit to have a big heart and be forgiving at times. He wants Rohit to be true, loyal and understanding in his marriage. Veena feels proud of Naren. Rohit doesn’t show any concord. Mahesh gets mad when he sees Sonakshi as the bride. He wants to take her away soon. She is stressed about Netra. He tells her that he can help her. She asks him to find out about the crew. Sonakshi contacts Netra and learns about the accident case. Netra feels its her worst day, since she isn’t able to shoot the episode or convince the channel.

Sonakshi pacifies her and gives her word to record the scenes at some studio located near her residence. She asks Netra to complete the set up and arrange things before she reaches. Netra is grateful to her. Sonakshi asks Mahesh to keep this a secret. She tries to call her driver Shankar. Mahesh makes Shankar away. Suman informs Sonakshi about Sippys arrival. She asks Sonakshi to wait for her. Netra asks Sonakshi to reach soon on time. Sonakshi assures to finish her shoot on time and return in the marriage.

Rohit enjoys his baraat dance with family. He learns about a ritual where Suman will hold his nose, signifying Sonakshi’s dominance. Sippys make plans to save Rohit, while the latter is fine to become Sonakshi’s puppet. Suman learns that Sonakshi is planning to leave. She warns Sonakshi against making any mistake to upset Sippys. Mahesh assists Sonakshi. Suman welcomes Sippys and performs Rohit’s aarti. Rohit asks her to complete the rituals since he wants Sonakshi to always dominate his life. Suman gets touched and feels he is the best guy for Sonakshi.

She completes the rituals. She finds Rohit very sweet. Rohit gets restless to meet Sonakshi. Veena wants him to keep patience. Suman doesn’t know that Sonakshi has already decided to leave from the house. Sonakshi fights her dilemma. She doesn’t want her show to end, which would mean many people losing their work. She wants her marriage to be auspicious for everyone. Raima takes Sippy’s ancestral jewellery for Sonakshi. She finds Sonakshi worried and asks the matter. She learns about Sonakshi’s professional needs. She asks Sonakshi to go and come soon, until she will take the bride’s get up to mislead everyone.

She wins Sonakshi’s trust and takes the bridal avatar to marry Rohit. Raima feels fate is giving her a chance to marry her love. Sulochana supports Raima. They are sure that Sonakshi won’t return. Sonakshi gets help from Mahesh, which turns into a terrible nightmare. Mahesh tries to forcibly marry her and ends up in a fight sequence with Sonakshi and Rohit. Rohit reaches Sonakshi on time to rescue her, after knowing Raima’s presence in the mandap. Rohit and Sonakshi conquer Raima and Mahesh’s evil to finally unite.