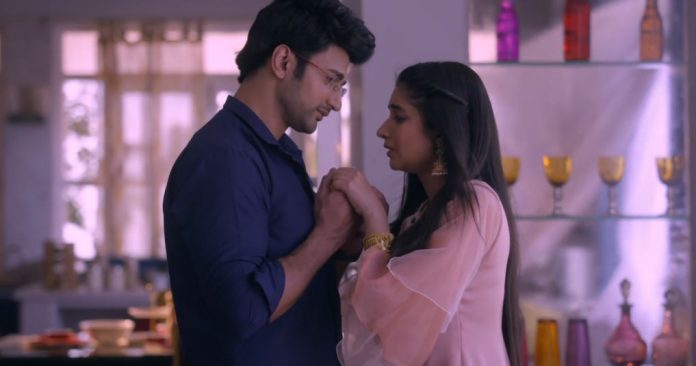 Tellyreviews Kahan Hum Guddan Bahu Begum Spoilers Mahesh tortures Sonakshi to the extent that she gives up. He forcibly tries to marry her. Sonakshi doesn’t give up. She shouts to get some help. She finally gets some help from the kinners group who pass by the godown. Mahesh’s plan to marry Sonakshi fails. He gets beaten up by the kinners. The kinners threaten to burn him alive. They protect Sonakshi, the very own Parvati. They ask Sonakshi to go for her marriage. Sonakshi gets thankful to them. She gets blessings from the kinners.

Guddan Tumse Na Ho Payega:
Dadi welcomes Akshat and Guddan home. She does their aarti and performs their Grahpravesh. Kishore gets mad and ruins the aarti. He speaks against Guddan. He is angry that Guddan got Durga punished. Kishore tells Dadi that Guddan doesn’t deserve the aarti. He is angry that his wife had to go to jail because of Guddan Maa. Akshat brings his son to senses. Akshat reprimands Kishore. He defends his wife. He tells that Durga is paying for her own crimes. He doesn’t want anyone to blame Guddan. Kishore is upset because of Vikrant.

Guddan tells them that she will prove Vikrant’s innocence. She takes some time to fulfill the challenge. Later, Akshat and Dadi pamper Alisha. Alisha stays safe because of Akshat and Guddan’s love. Dadi blesses Alisha and gifts her a chain. Guddan will face more problems because of Alisha.

Bahu Begum:
Azaan and Shayra find Adil a good person, suitable to become Noor’s life partner. Azaan finds Adil trying to meet Noor at night. He hinders Adil and reminds him the timings to meet a girl. He explains the house rules and takes Adil out from Noor’s room. Noor feels lucky to have a protective friend like Azaan. She had conspired to marry Azaan before. She doesn’t think she deserves true love. She gets hesitant to explain her past to Adil and reciprocate his love. She shares her dilemma with Shayra.

Shayra finds Noor clean hearted. She supports Noor. Adil proposes Shayra in an attempt to rehearse before proposing Noor for marriage. Shayra wants Adil to make his feelings reach Noor so that the latter doesn’t refuse for any reason. She polays cupid for Adil and Noor.