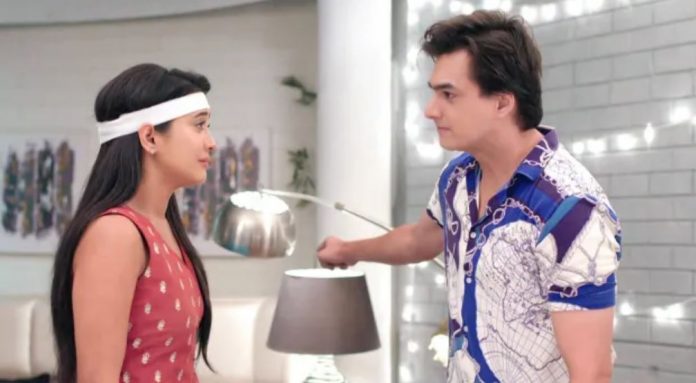 YRKKH Nimki Vidhayak Upcoming Spoilers Kartik and Naira’s Diwali becomes a big happy moment for them, since Kairav has accepted Kartik as his dad. Kairav compliments Kartik to be the best dad in the world. Kairav brings happiness in Goenkas’ Diwali. Goenkas get ahead with the celebrations. Kartik and Naira become part of the grand Diwali celebrations. Kartik plays with Kartik and lights fire crackers. They enjoy much with Kairav, until Vedika’s call disturbs Kartik. Vedika informs about her return. Kartik gets worried that everything will spoil again once Vedika returns. He doesn’t want Naira and Kairav’s smile to disappear. Naira is very well aware that she has no right on Kartik now. Kartik finds her hurt. They get into a moment.

Nimki Vidhayak: Nimki tells the media that Mahua is her sister. This news fumes Parag. He thinks Nimki had sent Mahua to trap and defame him. He tells Ganga that Nimki has done a drama to win her heart. He wants to kill Nimki. Ganga doesn’t want him to do anything wrong that gets her in suspicion. She asks Parag to marry Nimki. She tells that Nimki will become his wife and get caged at home, marriage will be best weapon for revenge. Parag agrees to her.

Nimki gets her pictures clicked by Abhimanyu. Tunne asks Mahua why did she go out alone to the market. He wants to protect her. Parag comes across Mahua. Nimki cracks jokes. Abhimanyu is happy to see her happy. Nimki drops some water on Mahua’s book. She cleans the book. Parag wants to knock down Mahua by his car. He goes to slap her. Mahua spits on him and insults him. He gets raging. Shankar stops him from killing Mahua. Mahua comes home in upset mood.

She tells Nimki that she will not forgive her for spoiling the book. Nimki is angry that Mahua decided her abortion without her consent. She tells Mahua that she was angry on her for long, but Mahua should have supported her. She finds her sister egoistic. She makes Mahua realize her mistake. Mahua tells Nimki that they will always be sisters. The sisters unite.