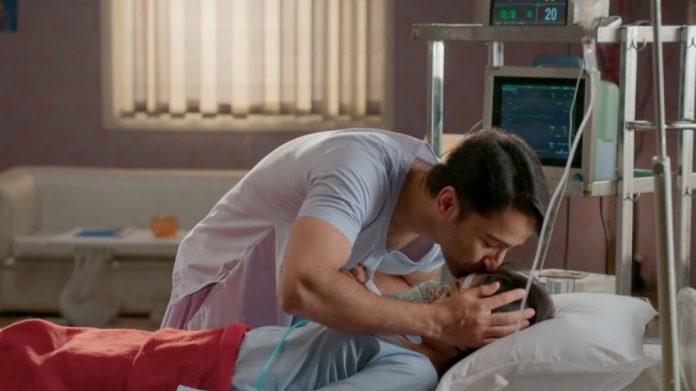 Rishtey Pyaar Vengeance track Abir Mishti to suffer again Abir is concerned for Mishti. Abir and Mishti are rushed to the hospital, after Nannu scolds the reporters. Abir and Mishti don’t leave each other’s hand. Meenakshi is upset that Mishti came back, which won’t be good for her family. She doesn’t want anyone to know about Mishti. She calls Kunal to reprimand him for his lies about Abir. She asks him why did he hide about Abir and Mishti. She informs him that Abir was stuck in the jungle fire. Kunal didn’t know about it. He gets worried for Abir. He doesn’t want to leave Kuhu alone, but gets helpless. He wants to come back as soon as he checks on Abir.

He informs the nurse that he would be back and till then Kuhu shouldn’t not go anywhere. He goes to find Abir. Maheshwaris are also worried after knowing that Nannu and Mishti are out at the resort. They learn that Mishti is missing. This makes them much tensed. Abir enquires about Mishti. He doesn’t listen to anyone and just goes to see Mishti. Abir gets worried knowing Mishti isn’t fine. Kuhu gets mistaken that Kunal wasn’t with her. She feels lonely and leaves from the hospital. Vishwamber calls her to know about Mishti. She feels bad that even her family doesn’t care for her. She learns about Mishti stuck in the jungle.

She tells that it maybe Nannu’s plan. She cries that Kunal didn’t come. She goes to the resort. Nannu recalls the time spent with Mishti. He feels for Mishti like never before. He misses her. Abir meets Mishti and encourages her to fight for her life. Nannu blames himself since it was his idea to put Mishti in risk. He wants to punish himself. He lies to Rajshri that Mishti is fine. He feels guilty to face the family. Mishti doesn’t let Abir go away from her. Abir promises to not part ways again. Meenakshi reaches the hospital and finds them together.

Kunal learns that Kuhu left. He gets mistaken. He wanted her to wait for him. Meenakshi is much hurt to see Abir taking Mishti’s responsibility. She realizes that Mishti intentionally plotted this offsite meeting with the help of Nishant. She loses her cool. She feels Mishti is trapping Abir again. Meenakshi will make Abir and Mishti suffer once again by playing unfair. On the other hand, Kunal realizes his love for Kuhu. He reaches home to find Kuhu before him. He argues with her, being upset that she didn’t wait for him.

Kuhu gets rude towards him. She tells that she is counting days to get free from the unwanted marriage. Kunal gets too upset that he lose her love, when he realized his feelings. Kunal wants to call off his divorce and start afresh. He wishes Kuhu gives him another chance. Kunal and Kuhu’s relation gets the deserving chance, while Meenakshi strikes Abir and Mishti’s happiness again. Will Mishti 2.0 give up on her love this time? There will be a complicated love triangle coming up with Nannu’s love realization for Mishti. Keep reading.