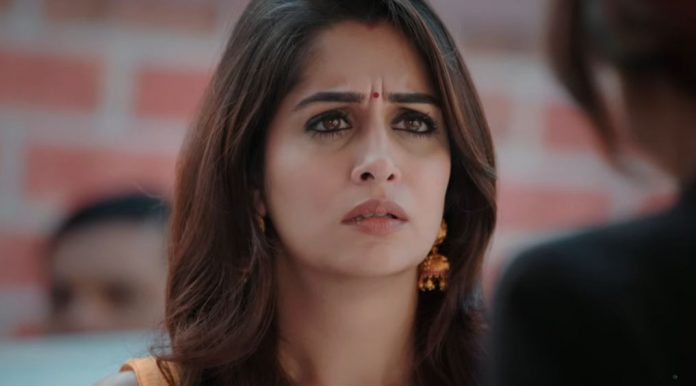 Kahan Hum Starplus Shocker Tonight Ronakshi split Sonakshi is much disturbed after meeting Rani. She comes home and gets to see Pooja caring for a cute puppy. Pooja tells her that the puppy can’t be left unattended. She wants to take care of the puppy. Sonakshi supports Pooja’s wish. She knows Pooja is kind hearted. Pooja relates herself with the puppy. She tells that she will be adopting the puppy as the Sippys adopted an orphan like her. She breaks down thinking that she is an orphan, whom Sippy pitied. Pooja tells her that they will name the puppy as Pooja, since her story is exactly the same. Pooja gets glad to see the puppy’s mum coming to get the puppy back.

She caresses them. Sonakshi feels sorry for Pooja. She knows Pooja’s mental state. She wants to encourage Pooja by revealing the truth. She doesn’t want Pooja to consider herself an orphan when her mum is still alive. She wants to take Pooja to her mum. She feels bounded by her promise to Rohit. She doesn’t know what to do. She fears that Pooja will attempt suicide again. She breaks the truth to Pooja that she has met her mum. Pooja can’t believe that she isn’t an orphan. Vimmi overhears them. Pooja insists her to take her to her mother soon, without telling anyone. Sonakshi doesn’t think Rohit will like it.

Pooja begs her to accept her request. Sonakshi agrees to Pooja. On the other hand, Rohan and Pari are certain to hide their affair from their families. Rohan tells her that he loves her and its true. He can’t deny his feelings for Pari. Pari is glad to get him. She is worried because of Rohit and Sonakshi’s relation getting at stake because of her. He assures to manage everything if she is with him. He helps her lie to Suman. He tells her that their affair won’t be known to anyone. Pari lies to Suman just like he instructs her. Rohan makes sure that Tanya or Suman don’t know about their meetings.

Tanya gets the tracker delivered. She wants to use the tracker to find out the girl in Rohan’s life. She doesn’t want to spare him. Sonakshi gets Pooja to Rani’s house. Pooja gets too emotional on meeting Rani. She questions Rani for abandoning her. She learns about her illegitimate birth. She still wants to be with Rani. Rani tells her that she missed her a lot, but she promised Nishi to never meet her. She explains her helplessness. She wanted a good life for Pooja. She asks Pooja to forgive her. Pooja melts her heart knowing her sobbing story. She forgives Rani.

Rani tells that Nishi kept the promise and sent Pooja’s pictures regularly. She emotionally breaks down. She is glad that she met Pooja and now she can go away. Pooja doesn’t want Rani to go anywhere. She wants to take her home. She asks Sonakshi to convince Rani. Sonakshi gets confused. She thinks of the family’s reaction over Rani’s entry. Pooja doesn’t want to leave Rani alone. Rohit learns that Sonakshi has gone to meet Rani and also took along Pooja. Akash and Deepa reveal the truth about Sonakshi’s move to Sippy family. Rohit runs out of the hospital, leaving all his work. He reaches home to meet the family.

Nishi is much angry that Sonakshi crossed limits this time. She wants to scold Sonakshi. Sonakshi returns just to get confronted by Nishi. Pooja gets Rani home and reveals that Rani is her biological mother. Rohit is scared seeing Rani home. He fears his family shattering. He tells Sonakshi that she has done a huge mistake by uniting Rani and Pooja. He tells that she will really regret her actions. Sonakshi fears his prediction. Sonakshi and Rohit face huge problems because of Rani. They get into an argument and deny to understand each other. Rohit and Sonakshi fear their split if Sippy family falls apart.