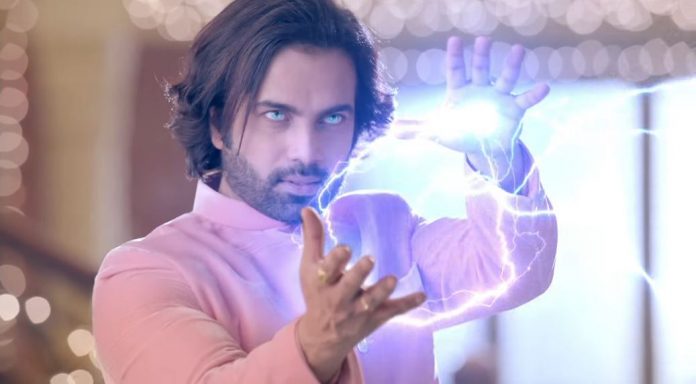 Starplus Magic Mystic Aman faces Sifriti Jinn Kabir Roshni falls in the pool. Aman too jumps into the fool. A moment is created between them. Aman and Roshni get romantic. She gets falling for him, even when she has no memories that she loves him. Kabir is also falling for Roshni. He doesn’t want Aman to get any happiness. He wants to snatch Roshni from him. He turns raging seeing their romance and breaks the illusion mirror taken from Tabeezi. He goes away, while the mirror joins itself. Aman flies in the air with Roshni. He impresses her with his magic. She can’t help praising him. She doesn’t want to praise him much. She thinks if she likes him. The family dances in the function.

Aman and Kabir realize their feelings for Roshni. Aman doesn’t realize that the illusion mirror is catching everyone inside. The family gets trapped inside the mirror. Aman saves Kabir and tells him about the dangerous mirror. They find the family trapped inside. He asks Kabir to help him, but Kabir doesn’t care for anyone. Kabir asks Aman to leave the mirror in the air and not hold it to create the earthquake. Kabir agrees to help only when he realizes that Roshni is also trapped inside. He frees the family from the mirror by using his magic. Aman is much shocked to know about Kabir’s magical powers.

Roshni gets her memory back. She identifies Aman as her Khan Baba. He gets glad and takes care of her. Roshni and Aman share a moment again. Aman is glad that she is identifying him. Kabir doesn’t want Roshni to remember anything. He just wants Roshni. He does a magic again and makes Roshni forget everything. Aman realizes that Kabir is Sifriti Jinn. He follows Kabir to Tabeezi’s house. Kabir goes to trap Tabeezi again. His truth gets exposed in front of Aman. Aman realizes that Kabir wants to kill him. He gets much emotional. He reveals Kabir’s truth to the family. He decides to fight Kabir to save his family.