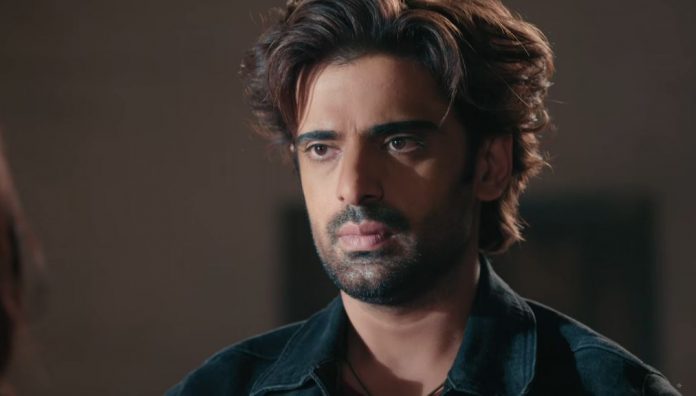 Kulfi Kumarr Mega challenge drama Kulfi tracks Sikandar Chalu lies to Lovely and everyone that she is Sikandar’s first wife Nimrat. She claims to be Sikandar’s lover, wife and Kulfi’s mother. Lovely recalls that she had killed Nimrat. Chalu challenges Lovely to make her out of the house if she can. Lovely scolds Kulfi for making a random lady her mother. She asks Chalu to take money and get lost. Chalu slaps her in front of the media and guests. Kulfi and Amyra get scared seeing the high drama. Lovely wants to beat Chalu. Jimmy and Cutie stop Lovely. Chalu tells Lovely that she is Nimrat and will not leave her rights. Lovely tells them that Nimrat is dead. Chalu asks Lovely not to lie.

Lovely tells that Nimrat met with an accident because of her. She tells that she even served her term in the jail for the accident. Chalu accuses her in such a way that Lovely gets speechless. Chalu calls Lovely a criminal. Lovely tells that she isn’t a criminal, Nimrat is dead and Chalu can’t be Nimrat. Chalu asks Lovely if she has seen Nimrat before that she is denying it. She tells that she didn’t die in the accident and she has come back to get her daughter’s rights. Chalu and Lovely’s argument gets worse. Chalu curses her. Chalu tells that it was fate that she returns to Kulfi. She fakes her tears and shouts out to tell her sad story to the media.

Kulfi gets worried seeing Chalu’s drama. Chalu calls Lovely a murderer. She accuses Lovely for abandoning Kulfi. She tells that she will be with Sikandar now. Lovely can’t accept this. Chalu asks Lovely for being so shameless and partying when Sikandar is sick. She tells the media that Sikandar is really critical. Kulfi goes to meet Sikandar while Chalu keeps everyone engaged by her loud crying drama. The reporters cover the news and ask Lovely why did she do wrong with Nimrat. Lovely gets accused by the media. She fails to prove Chalu wrong.

She gets targeted. Cutie tries to defend Lovely. Chalu pushes her away. Amyra stops Kulfi from meeting Sikandar. She tells Lovely that Kulfi was trying to meet Sikandar. Chalu stops Lovely from scolding Sikandar. Lovely tells that Kulfi is responsible for Sikandar’s worse state. Chalu and Kulfi tell Lovely that Sikandar is targeted by some hidden enemy. They clear out that the surgery was successful. Lovely asks them to wrap the drama and leave. She tells that she has Nimrat’s photo, which will expose Chalu’s drama. Lovely realizes that she has no photo of Nimrat as a record. She tells Cutie that she had thrown Nimrat’s photo in anger.

Lovely tells that she doesn’t have the photo with her. This relieves Chalu. Lovely asks Kulfi to remember her mum’s values and teachings. She asks her to say the truth that Chalu isn’t her mother. Kulfi thinks to lie for Sikandar’s sake. She lies that Chalu is her mum. Jimmy gets angry on them. Lovely wants to prove Chalu wrong some how. Amyra hates Kulfi for the lies. Lovely gets Mohendar to testify that Chalu isn’t Nimrat. She asks Mohendar to look at Chalu and say the truth that she isn’t real Nimrat. Chalu tells that Mohendar has seen her for the first time. Mohendar tells that he hasn’t seen Nimrat ever.

He asks how can Nimrat be alive. Lovely asks him to shut up if he is in shock. Lovely’s party ends because of the drama. Lovely threatens to call the police. Chalu tells Lovely that even police can’t oust her. Lovely challenges Kulfi that she will never let her meet Sikandar. Chalu and Kulfi find clues that lead to the secret chamber, where Sikandar is locked up by Lovely.