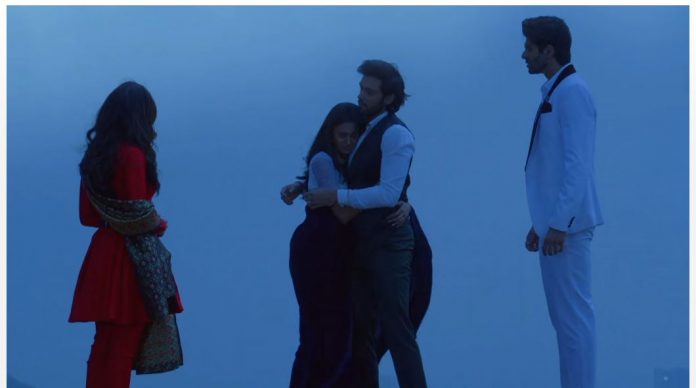 Kasautii Upcoming Tonight Anurag chases the truth Anurag catches the goon to get information about Prerna. The goon refuse to give any details. He lies at first. Anurag bashes him up to the point that goon agrees to tell him about Prerna. Anurag learns that Prerna is taken to the cliff. Anurag spares his life and rushes to the cliff to save Prerna. Ronit and Jagga take Prerna to the cliff by taking a short cut. Anurag gets confused and takes the longer route. Komolika meets Prerna at the cliff. She tries to instil fear in Prerna’s mind. She threatens Prerna about her baby. She wants to beat Prerna.

Prerna comes to consciousness and defends. Komolika doesn’t want to give her an easy death. She tells that she was going to give an answer for the slap and punish her. She asks Prerna to jump down the cliff and commit suicide, else she will be shooting at her stomach and kill her baby right away. Prerna becomes the target of her madness again. Komolika asks Ronit to tie up Prerna and then give her death in an exciting way. She wants to enjoy Prerna’s death. She explains her plan to Ronit and goes away to witness Prerna’s deadly fall.

Anurag races the car to reach the cliff soon. He wants to tell Prerna that he is coming to her. Ronit and Jagga tie up Prerna. They want to kill her just the way Komolika told her. Anurag reaches there in time. He gets scared of losing her. He hallucinates in fear. He feels Prerna had fallen down and left him forever. He gets back to his senses and runs to save Prerna. Anurag and Prerna try to defend the attack. Ronit and Jagga manage to push down Prerna. Prerna shouts to Anurag to get help. Anurag manages to reach her on time.

He gets hold of the rope and saves Prerna. Komolika doesn’t care for his evil team. She goes to Anurag and fakes her concern for Prerna. She tells that she has also come to help. Viraj too reaches there and finds Anurag saving Prerna. Viraj and Komolika help Anurag in the task. Anurag and Prerna share an emotional hug, since they didn’t think they will meet again. The fear of losing each other was more. Prerna had cleared to Komolika that she doesn’t love her life, but she loves Anurag a lot. She wants to live for the sake of Anurag and their families.

Komolika hates Prerna for her caring attitude, which has stolen Anurag’s heart. Anurag asks Prerna if she is okay or hurt. He gets concerned for her baby. Prerna tells him that baby is also fine. Anurag finds Ronit there. He wants to catch him up and get him punished. Prerna asks him not to go after the goons. She wants to be with Anurag. She is disturbed seeing Komolika around. Anurag asks Prerna to go home with Viraj. He rushes to catch Ronit, who flees in no time. Ronit takes the begger’s place to get saved. Anurag and Prerna get safe. Anurag asks Viraj to take good care of Prerna, which hurts Viraj.

Viraj makes Anurag realize their place in Prerna’s life. He wants to distance Anurag. Viraj tells Anurag that he knows looking after his fiancee Prerna. Anurag doesn’t feel bad on hearing the truth. He nabs Jagga to get information about the person who hired him for killing Prerna. Komolika gets panicking when she finds Anurag bringing Jagga home. She doesn’t want Jagga to name him. Sharmas thank Viraj and Anurag for saving Prerna. Anurag wants to find the source of threat on Prerna. Will Komolika get caught? Keep reading.