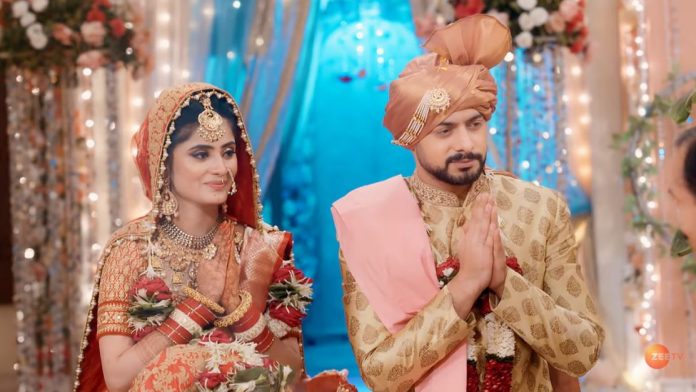 Manmohini Shiv Ananya marriage Ishq SubhanAllah Snips Ananya has married Shiv. The marriage function gets grand with performances from friends from Zee shows cast. Shiv is happy to wed Ananya. He plans to neutralize the danger posed towards her. Ananya’s wish finally gets fulfilled. She gets a huge shocker when Shiv goes missing post the marriage. Ananya looks for him and comes across her family, who behave very weird. Ananya’s Bua gets money. Dadi sees the jewellery that appears before her. Dadi does the puja of Laxmi.

Ananya finds Amar missing as well. She asks them about Shiv. She tells that she had married Shiv on Shivratri. Amar gets the powers from Shiv and ruins Ananya’s life. He captivates the family by blinding them by money. Ananya learns that Amar has done this. She asks him about Shiv. Amar tells her that he has become a devil and has much powers, he will shock her more by showing his magic. Ananya has a big task of finding Shiv.

Kabeer and Zara take a great disguise and get unidentifiable. They have to find the members of Shariah board. They know that Shahbaz has kidnapped them. They dress up like foreigners and fool Shahbaz and Jalali.

They have come to Jalalpur to defeat Jalal in his own plans. Zara wants Kabeer to win the post of chief Qazi. Zara stays away from Jalali. She fears that he will know her truth. She gets hurt and expects Kabeer to hold her. Kabeer doesn’t touch her, since she is a stranger for him. She understands that he respects their religion a lot. She respects Kabeer’s values. Kabeer and Zara are on the big mission to expose Jalali. They come across Jalali and his devils. They don’t want to fight Jalali. Kabeer tells that they have to find Kamran at any cost. They learn a big truth that Jalali is a Jinn.