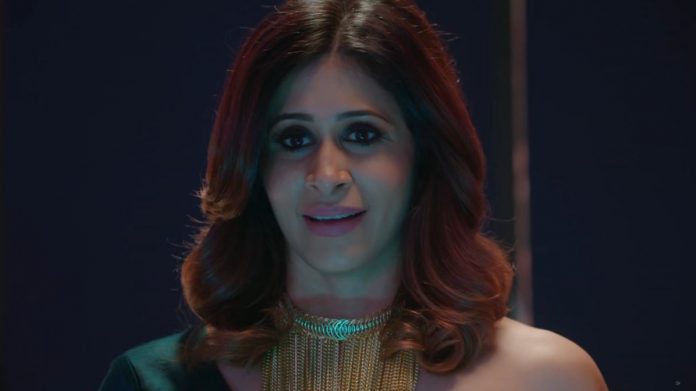 Kahaan Hum Ronakshi Nishi climax Super filmi elements Nishi plays evil once again and plans to harm Rohit this time. She lies to the doctor. She tells that she will inject the antidote to save Rohit’s life. She then ruins the antidote. She wants Rohit to die so that one of her problem ends. Nishi gets revengeful. Veena gets worried to see Rohit in critical state. Sonakshi takes nurse Parvati’s avatar to save Rohit. When Nishi comes in her way, Sonakshi slaps hard on her face. Sonakshi takes the antidote and injects Rohit. She saves Rohit’s life, just like Parvati saved Kunal in KPK show.

Rohit and Sonakshi make a plan to save Naren. Rohit follows her dramatic tv show idea. He makes Naren dress up in a saree and gives him a feminine look so that Nishi doesn’t doubt on him. He tells Sonakshi that he will take Naren to the hospital and remove the pacemaker by operating him. He asks Sonakshi to stop Nishi at home some how. He takes Naren on the shakes. He doesn’t let anyone see Naren. Sonakshi is trying to expose Nishi. Nishi catches her and realizes that she is Sonakshi. She splashes water on Nishi. Sonakshi doesn’t lose courage. She scolds Nishi for cheating the family.

She exposes Nishi’s truth to the family, when Rohit comes home after successful removal of compromised pacemaker. Rohit and Sonakshi reveal that Nishi tried to kill Naren and framed Sonakshi. Veena and entire family are much shocked. Veena angrily slaps Nishi for trying to kill Naren and also breaking the family. She feels much sorry and apologizes to Sonakshi. Sonakshi hugs and forgives Veena. Rastogis and Sippys clear their differences, while Rohit calls the police for arresting Nishi.

Nishi gets slapped by Sonakshi as well before leaving the Sippy mansion. She loses her family and all the assets which she acquired by evil ways. Rohit and Sonakshi celebrate their union with their families in a grand party. Naren recovers and returns to his family. Deepa and Akash get married and are seen having a homecoming ceremony, along with the lovely Ronakshi. Sonakshi becomes the show’s Parvati again, when Netra meets her to apologize for her rude behavior.

Ahana and Mishka plan to keep Prisha away from Rudraksh in the Sangeet, so that Mishka can dance with him. Ahana has hurt Prisha and made her out of the way. Saransh learns Ahana’s plan and instead throws itching powder at him. He makes Ahana fall on the stage and causes much insult. Ahana gets angered on him for ruining her hard built image. Saransh doesn’t want Ahana to trouble Prisha. Ahana tells Balraj that Saransh can’t stay with them. Balraj also finds hard to tolerate Prisha and Saransh.

Prisha is much hurt and tells Rudraksh that she can’t even stand on her foot. Rudraksh doesn’t want to perform with Mishka. He cares for his image in front of the media as a loving husband. Ahana asks him to dance with Mishka. Mishka gets excited. Rudraksh convinces Prisha to perform with her, so that they get rid of the child care officer. He wants to trouble her and make her dance even if she can’t manage.