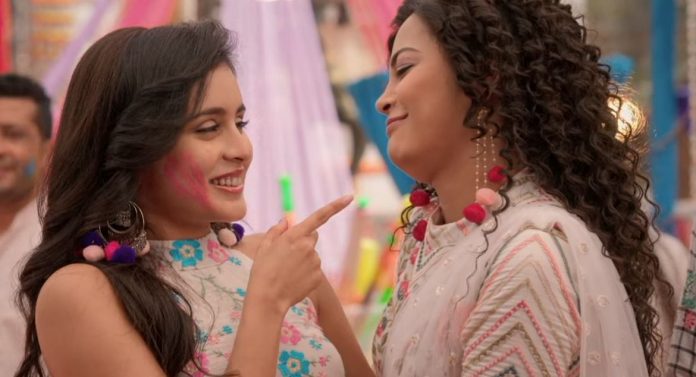 Rishtey New Starplus Meenakshi wicked plans for Mishti Rajshri and Varsha try to explain Kuki that she shouldn’t fight with Mishti when they are in Rajvansh house. They ask Kuhu to come and celebrate Holi, since Meenakshi will be asking for her. Kuhu asks them to explain Mishti. They tell that Mishti has already started celebrating with the family. They leave the decision on Kuhu. Ketki gets laughing gas powder and hands it over to Kunal for his plan to unite Mishti and Kuhu. Kunal knows that Abir’s plan will surely work. Ketki tells that Mishti and Kuhu’s differences will end. Kunal comes across Meenakshi, who changes the packet with the intoxication drugs.

She wants Mishti and Kuhu to lose their senses and then vent out their bitter feelings about each other. She wants them to fight by speaking the truth. Abir and Kunal come up with an idea to keep a Golgappa competition. Kunal convinces Mishti to represent Maheshwaris, while Abir convinces Kuhu to represent Rajvansh family. Abir emotionally blackmails Kuhu and takes her for the competition. Mishti and Kuhu happily participate. Also, Nidhi and Jasmeet join the competition. They want to prove who is the best. Abir and Kunal let them double the fun.

Nidhi and Jasmeet also compete and get into the intoxication. They speak nonsense, which alerts Kunal and Abir. They wonder what did they consume. They check the powder packet and realize that its Bhaang powder. They ask Ketki about getting the wrong powder. Ketki has no idea about it. Abir and Kunal get worried that Mishti and Kuhu may get into a big fight because of their state. Meenakshi gets hopeful when she finds Mishti and Kuhu fighting. She is then shocked to see Mishti and Kuhu loving each other and defending. They talk with much love and respect. This wasn’t expected by Meenakshi.

Abir tells Rajshri that both the girls are intoxicated, their feelings are true and they both really love each other. He feels proud of them. Mishti and Kuhu apologize to each other and sing praises, calling each other the best sister. Mishti and Kuhu enjoy with Abir, Kunal and family members. The dance performances go on, while Abir fulfills Mishti’s challenge by applying her holi colours romantically. Nidhi challenges Jasmeet and Kuhu to apply colour to Meenakshi. Rajvansh family tries to stop Kuhu, but the latter applies the holi colour to Meenakshi.

Meenakshi feels its waste of time to hear the girls’ nonsense talks. She isn’t able to leave. Meenakshi doesn’t get upset and awaits Mishti and Kuhu’s fight. Mishti also wants to apply colour to Meenakshi. Mishti and Kuhu share a laugh after joking on their Dragon Saas Meenakshi. They leave Meenakshi raging. Meenakshi wants to plan something new. Abir and Mishti’s romance will be seen. Meenakshi will be using Kuhu’s insecurities once again to make her against Mishti. It gets evident that both Mishti and Kuhu love each other genuinely. Will they fail Meenakshi’s plans by their unity? Keep reading.