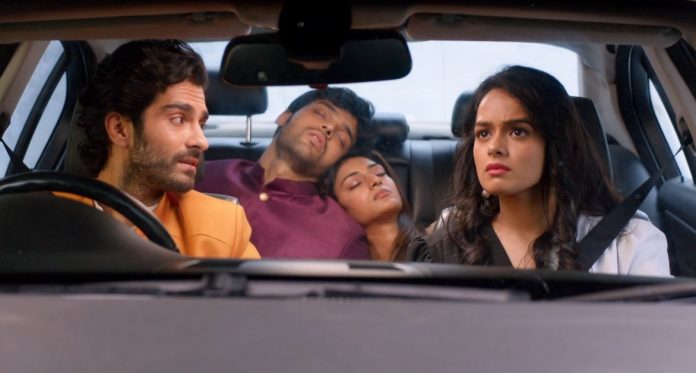 Starplus Ek Nayi Kasautii Kuki Kaushik save Anurag Prerna Kuki panics on knowing about Prerna stuck inside the fire caught up at the pandal. She wants to save Prerna some how. She doesn’t know how to step inside, when the gatekeepers doesn’t let anyone enter the place. Mohini feels that Anurag is in big problem. She cries for him and tries to find out. Komolika tells that Anurag left for home. Mohini doesn’t get convinced. She isn’t given any entry inside. Mohini and her family leave for home, while Kuki finds Kaushik around to seek help. She borrows his car to save Prerna.

He doesn’t think its wise to risk life to save someone. Even then, he doesn’t leave her alone and accompanies her, while she gatecrashes into the pandal to reach Prerna. He thinks he has done good to help Kuki, since he found Anurag in need of help. He saves Anurag and also helps Kuki in saving Prerna. Kuki and Kaushik succeed in getting Anurag and Prerna out from the fire in time. They end up arguing because of their earlier meet. She tells him that her dad will arrange the best doctor for her mum, she doesn’t want to take Prerna to any hospital. He lets her manage things on her own, when she insists.

Kaushik informs Komolika about Anurag’s state. He rushes Anurag home. Kuki informs Mr. Bajaj about Prerna and apologizes that she failed to take care of her. Mr. Bajaj asks her not to worry, Prerna will be fine. She takes Prerna home and gets her treated. Mr. Bajaj loves Prerna and wants her fine. He finds hard to live without her. Kuki doesn’t want to upset her dad by being careless towards Prerna. She also loves Prerna a lot. Prerna enquires about Anurag. Kuki tells that Anurag also got rescued, he was fine when he was taken by his nephew. Prerna just wants to punish Anurag.

Anurag wakes up and tells Mohini that he has seen Prerna, she has come back. Mohini doesn’t want Komolika to know this. She seems scared of Komolika. Komolika makes them realize that she is Anurag’s reality, while Prerna is just a dream. Komolika controls the entire family and upsets them. She rules over Basu family by blackmailing them, since she owns everything now. Prerna wants to win the land auction and defeat Anurag. Kuki tells that she has seen Anurag before. Prerna doesn’t tell about Anurag to her.

Kaushik gets Kuki’s earring and tells Anurag about her. Anurag feels happy when he is with Kaushik. He also keeps Komolika away by getting Kaushik in his room. It slowly gets revealed that none in the Basu family is happy with Komolika, they are helpless to obey her because of her dangerous threats. Nivedita regrets to live in such a family where she has lost her own voice. She wants to be away from the home, sunken into the work at the office. Mohini feels sorry and tries to make Nivedita’s mood better.

Kuki tells Prerna about Kaushik. Prerna wants to meet Anurag, who is sure that she has returned to the city. Mohini and Nivedita tolerate Komolika. Komolika doesn’t care for anyone. She wants to torture them. Anurag and Prerna will be meeting in the land auction event.