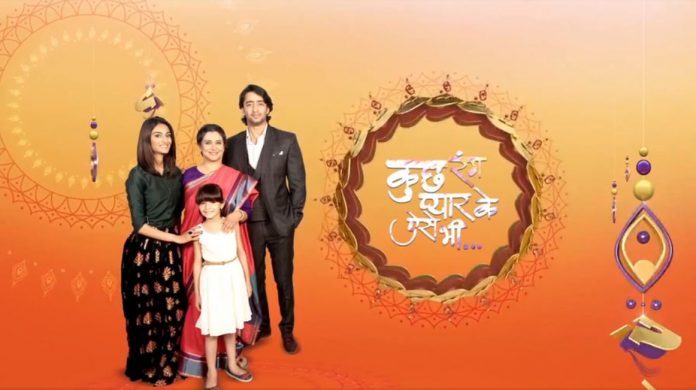 Kuch Rang Pyar Ke Season 2 Sony Dev Sonakshi Epi 1 Dev and Sonakshi’s life changes after they become parents again. They find hard to handle the kiids, Suhana and Shubh. Sonakshi continues her job, which troubles the family in handling the kids in her absence. Ishwari wants Sonakshi to quit the job. Dev doesn’t want this. He takes the responsibility of the house and kids. Dev and Sonakshi wake up with Shubh’s cry. Dev wants Sonakshi to fulfill her good sleep.

Moreover, Dev sings a new lullaby for Shubh, which makes Sonakshi laugh. Dev tells that he wants to learn in handling his baby. He does his best as the doting father. Sonakshi finds him struggling with the house duties. Dev proves that he can manage everything alone. Ishwari wants the kids’ upbringing to get better. She asks Sonakshi to stay at home. Dev supports Sonakshi’s profession. They find less time to spend together. Dev confesses love to Sonakshi. He knows that she loves her work a lot and wants her to continue.

Their romance breaks because of Shubh. He decides to quit his job and give all his time to his kids. He shows his equal share in the responsibility of the house. He wants to manage everything turn by turn, since he has promised Sonakshi to unconditionally support her. He feels her job makes her the best, she should plan nutrition of a thousand kids, than just being concerned for Shubh.

Ishwari learns about Sonakshi’s work commitment for the big project. She thinks Shubh is few months old and needs mother’s care. Dev wants to prove that he is also a parent and holds equal duties. Sonakshi discusses the project issues with Ishwari. She tells Ishwari that she has recovered and can join the job. Ishwari tells her that child needs a mother until he turns six months old. Sonakshi wants the family to look after Shubh. Ishwari agrees to her request, but some conflicts begin in the family because of Sonakshi’s decision.

Reviewed Rating for this particular episode Kuch Rang Pyar Ke Season 2 Sony Dev Sonakshi Epi 1: 5/5
This rating is solely based on the opinion of the writer. You may post your take on the show in the comment section below.