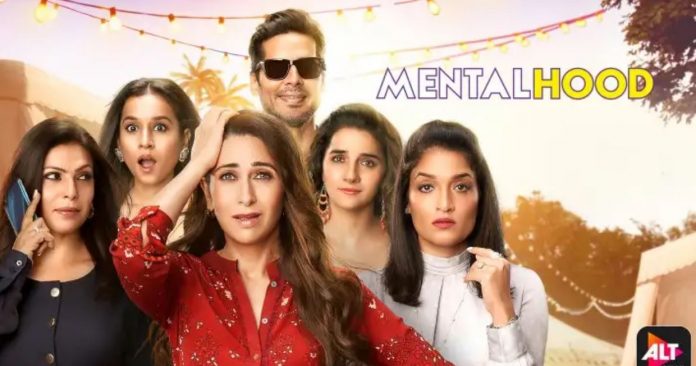 Mentalhood Alt Balaji Karishma Kapoor Sanjay Suri Epi 1 Meira Sharma is seen struggling in the phase of motherhood, which seems more of a suffering to her. She wants to be the best mom in the world. She gets frustrated to hear the complains about her children. She has to be sure that their upbringing is going well.

Motherhood becomes mentalhood for her when enters a battle to become a supermom, competing with other moms in the big competition. She enjoys her yoga class. She introduces her children to Diksha. Diksha tells her about her son Nirakar. Meira updates her husband Anmol about her schedule. She gets a call from the school for an urgent PTM. Anuja reaches the school. Meira gets to meet her and faces a parking issue. Meira learns that Anuja had summoned her.

Anuja aka Ajo spreads her Mozilla terror in the school. She is a supermom herself. She wants Meira’s kids to behave and get perfect. Preeti suggests Meira to apologize to Ajo. Ajo gets angry on Meira’s Chole bhature dish, which is too oily and unhealthy for the kids. Meira tells that she got the food duty and thought the tasty dish would be good. Ajo disapproves her thinking. Ajo asks her to attend classes. She doesn’t want to approve the dish, since the high profile standards of the international school have to be maintained.

Meira updates Anmol about Ajo. Meira and the kids miss Kanpur, their home city. They regret Anmol’s transfer to Mumbai. Preeti asks Meira to join the mom’s group to get regular updates. They meet Namrata, who is a successful businesswoman. Namrata tells Meira that her Chole bhature is a superhit.

Ajo and Namrata get into a big argument. Namrata asks Ajo if she is making up for her lack of achievements. Ajo feels perfectly raised kids is itself a big achievement. Ajo taunts her for being a half mom, since her son is adopted. Meira wants to know about their long battle.

Namrata tells that Ajo was her school mate, she was a topper since long, she married a rich man and got influential. Ajo taunts on her weakness. Namrata doesn’t define her just as a mother. She is happy with her supportive husband. Ajo tells her that motherhood is tougher than running business. Namrata doesn’t want to lose herself while becoming a good mom.

Ajo feels she is a great mom. Namrata asks Meira to get healthy food if she gets lunch duty next time. Meira takes her kids home. More about the Meira, Ajo, Namrata and Preeti’s families is seen. Meira wants to make sure that her family eats healthy food.

Ajo prepares for her interview. She gets her husband Tarun for the photoshoot. Meira thinks Ajo is right about the perfect upbringing. She joins the group and learns new mantras of motherhood. Ajo and Tarun get on the magazine’s front page as one of the top 10 influential couples. Meira gets busy with her son’s school project.

She loses the chance of bagging a good modelling project. She feels she has met such perfect mothers, who don’t even want to come second, leave about losing out. Meira thinks she isn’t a perfect mother, but a confused struggling mother. She pens down her thoughts in a blog to question the other moms. She wants to find satisfaction in her imperfection.

Reviewed Rating for this particular episode Mentalhood Alt Balaji Karishma Kapoor Sanjay Suri Epi 1: 5/5
This rating is solely based on the opinion of the writer. You may post your take on the show in the comment section below.