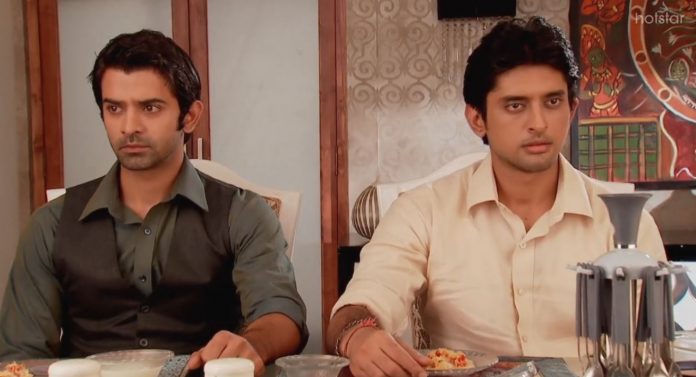 Anjali doesn’t think that Lavanya will change in a month. Nani tells that Lavanya will not learn their values in few weeks. Shyam calls up Khushi and fails to connect. Anjali asks Shyam to pay attention to her. He gets upset on her. He stops her from checking his phone. Bua ji feels unwell. Khushi is confused if they should leave or not. Payal tells her that they have packed their bags and should leave now.

Khushi tells that they should repay Shashi’s debts by finding a job. She tells Bua that the sweet shop is like their house. She doesn’t want to lose the shop. Bua ji doesn’t want them to go anywhere. She tells that they will not miss her if they stay along. Khushi makes her mind to leave for Lucknow. Manorama gets a shock to see Lavanya in a bathrobe. She warns Lavanya about Nani’s tests. She asks Lavanya to beware of Nani’s plans. She tells that she likes her for Arnav, she will help her and also inform Nani’s plans beforehand.

Lavanya tells her about weight loss tips. Arnav meets Lavanya. She tells him that she was waiting for him. Manorama wants to follow Lavanya and become trendy like her. She wants to make Lavanya her best friend so that she fails Nani. She wants Arnav to marry Lavanya, so that she can find a bride for Akash. Lavanya tells Arnav that she didn’t imagine herself staying in his house. She reminds him of Khushi’s low class dressing sense. Arnav gets angry when she criticizes Khushi. He asks Lavanya not to feel bad of Nani’s words.

Nani upsets Lavanya once again. Manorama gets friendly to Lavanya. Shyam finds Anjali upset and cheers her up by his sugary pleasing words. Nani asks Lavanya about her cooking skills. She wants to know what healthy food can Lavanya make. Arnav feels angered seeing Nani’s behavior to humiliate Lavanya.

Lavanya tells her that she doesn’t know cooking, since servant cooks food for her at her place. Lavanya doesn’t react when Nani insults her. Arnav’s temper gets high on watching the family drama. He tells that he doesn’t care about Lavanya’s cooking skills, just she matters to him. He mentions that such tests of skills isn’t important for him.

Nani asks him to mind his work. Shyam tells Lavanya that he will teach her cooking. He surprises Anjali by getting her favorite chaat. Arnav gets reminded of Khushi once again when Shyam tells that Lucknow’s things are really special. Shyam also thinks of Khushi while praising Lucknow. Anjali tells them that Khushi is also from Lucknow. She thinks to get sweets from Lucknow by asking out Khushi. Arnav recalls Khushi’s words that she is leaving for Lucknow.

Arnav and Shyam get worried when Anjali decides to met Khushi. Shyam receives a shocker to know that Khushi and Payal left for Lucknow without informing him.

Reviewed Rating for this particular episode IPKKND Arnav Shyam shocked Anjali makes a big move: 5/5
This rating is solely based on the opinion of the writer. You may post your take on the show in the comment section below.