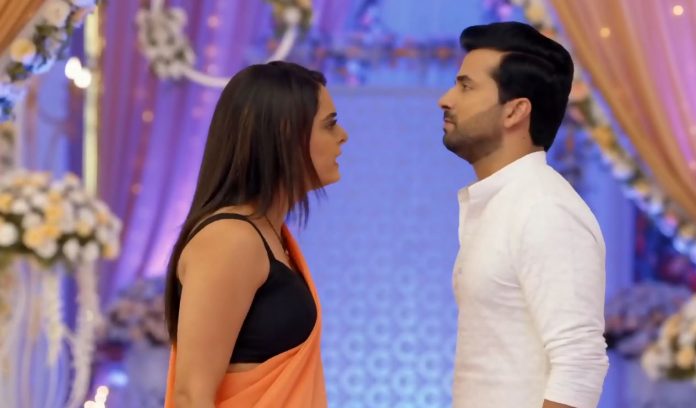 Kundali Bhagya Sherlyn Prithvi reveal the iniquitous plan Sherlyn wants revenge on Rishabh for his love and concern towards Preeta. She thinks its not wise to disturb Prithvi for a small task. She plans to execute her evil plan during Karan and Mahira’s wedding. She thinks to taunt Rishabh and anger him to the extent that he leaves the house. She gets ready to ruin the family peace. She goes to Rishabh and finds him upset.

She asks him if he is busy in some thoughts. She starts irritating him and expresses her rights of his wife. She asks him to gear up for Karan’s wedding. She decides his outfit. Rishabh wants to be alone for some time. He is confused about the blame on Preeta. She wants him to apologize to her for always praising Preeta and insulting her. Rishabh doesn’t think he owes an apology to her. She tells him that one has to do a lot to keep up a marriage. She admits that she has lied and did even wrong things to save her marriage. He wants her to get clear.

She tells him that Preeta should get punished for hurting Mahesh. He doesn’t want her to accuse Preeta all the time. She gets enraged that he always favors Preeta. She provokes him to shout on her. She gets Kareena to watch the argument. Kareena sympathizes with her. She scolds Rishabh for shouting on his wife. Sherlyn sheds tears and defends her husband. Rishabh asks Sherlyn to stop her drama. Karan and Preeta long for each other.

Sherlyn complains about Rishabh to the family. She gains their support. Rishabh doesn’t want Sherlyn to trouble him the same way like before. Rakhi wants to speak to Sherlyn. Rishabh confronts Sherlyn for her drama. Sherlyn and Rishabh’s argument gets witnessed by the family. Kritika defends Rishabh. She asks Sherlyn not to blame Rishabh when he is innocent. She gets reprimanded by Sanjana. She knows Rishabh is a gem at heart and can never hurt anyone. Rakhi supports Sherlyn by falling into her tear trap.

She asks Rishabh to apologize to Sherlyn, but he refuses. He goes to buy gifts for the guests. Sherlyn tells them that she will forgive Rishabh and forget the fight. Kareena praises her for always being so understanding and respecting. Rakhi assures Sanjana that she will look after Sherlyn. Sherlyn makes the family against Rishabh. Rishabh misses Preeta, who is really a nice girl. He wishes things get right for Preeta. Mahira dreams of her marriage with Karan. She is sure that Preeta will never come in her way now.

Shrishti tells Preeta that she got the newspaper. She reads Preeta’s horoscope, that she will always remember this day, when her fate supports her. Sherlyn calls up Prithvi to tell about the family drama. He tells her that he needs to inform her something and its really urgent. He pleases her with his talks. He informs his plan of getting Rishabh attacked. He asks her to not stick around Rishabh, else she maybe falling in trouble. She updates him about Rishabh’s schedule. Prithvi wants his revenge on Rishabh. Rishabh also reads his strange horoscope, which is just the same like Preeta. They both would either lose their lives or save someone’s life.

Reviewed Rating for this particular episode Kundali Bhagya Sherlyn Prithvi reveal the iniquitous plan 7th July 2020: 4/5
This rating is solely based on the opinion of the writer. You may post your take on the show in the comment section below.