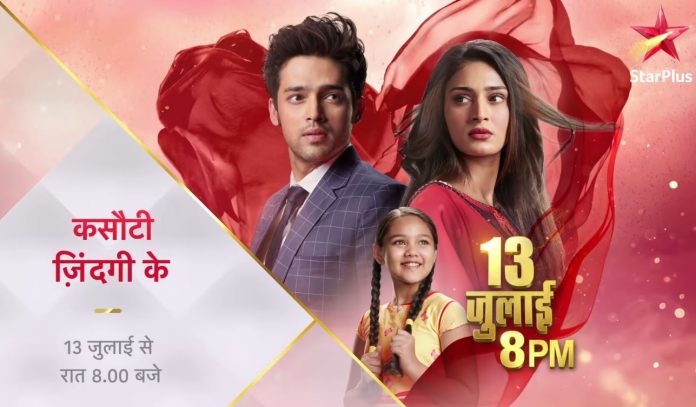 Starplus Kasautii Anurag’s huge rescue New Bajaj enters Kasautii Zindagii Kay new episodes open up after the lockdown in a rather much expected manner. The story picks up from the same point, when Prerna goes to the land registrar office to meet Mr. Sudeep, who happens to be Anurag’s good friend. Anurag asks Sudeep to sanction Prerna’s application for the land transfer. Sudeep does as Anurag requests him to do.

Prerna gets glad that she finally got the required permissions. She didn’t wish Anurag to pose like a hurdle again. Prerna sights Anurag at the office and misunderstands him once again. Prerna tries to hide from him and enters an under-construction site outside the office area. Anurag still finds her. He learns that she has gone to the under-construction site and taken big risk, despite getting warned by the watchman. Prerna thinks Anurag won’t follow her further, but he does.

Moreover, Anurag catches her to take her to a safe place. She doesn’t give up on her misunderstanding and gets arguing with him, bringing out the suppressed frustration in her heart. She speaks volumes of the hatred she holds for him. Anurag is aware that her love was deep and even her hatred is intense. He tells her that he isn’t willing to save her, but as per her own plan, he has got trapped.

He remarks that she had intentionally put herself in danger so that he saves her out of concern and gets closer to her once again. He asks her to stop trying at someone else’s husband. He reminds her that he is Komolika’s husband now and loves Komolika dearly, after having cheated on Prerna. Prerna hates him even more on hearing his sharp remarks. She tells him that she would not let him go away easily, she will exact her revenge by ruining him in the business. Anurag tells her that they will have to stay safe first.

The construction site material begins to shower down on them. Anurag saves Prerna from getting hurt. Prerna gets into a moment with him. She tells him that she will never depend on him. Anurag doesn’t give her any false hopes and keeps on hitting on her feelings. He finally convinces her to leave from the site. Prerna mentions that he will get a major shocker in the newspapers when he reads about her new success, signing about the land deal.

The very next moment, she finds him lying under the debris. Prerna gets worried for his life. She tries to revive him and shouts to him to bring his fighting spirit back. She tells him that she still has to take revenge on him and will not let him die easily.

She also adds that just she has the right to punish him. With much difficulty, she takes Anurag to the hospital, where she admits him and speeds up his treatment process. The doctor asks for her consent if she is family to Anurag. He tells about the immediate surgery required to save Anurag.

She gets helpless to sign on the consent form as Anurag’s wife, just to save his life to take her revenge on him. She wants him to be alive to face the big disaster. Komolika and Mohini learn about Anurag’s accident at the site and how Prerna has saved him by posing as his wife in front of the doctors.

Komolika wants to kill Prerna for once and all. She gets much enraged to know Prerna’s dare. She calls up Mr. Bajaj to inform him about Prerna signing the form as Anurag’s wife, Prerna’s hidden feelings for Anurag and her inclination to get back to Anurag. She warns Mr. Bajaj against letting Prerna enter Anurag’s life again. Mr. Bajaj doesn’t want to lose Prerna either. He decides to stop her from getting close to Anurag.

Reviewed Rating for this particular episode Starplus Kasautii Anurag’s huge rescue New Bajaj enters 13th July 2020: 2/5 Dragging like before
This rating is solely based on the opinion of the writer. You may post your take on the show in the comment section below.