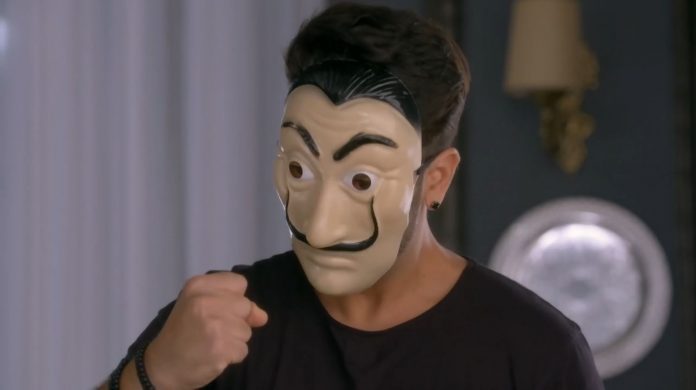 Sameer tells her that they will go and save Karan, Rishabh and Preeta. Sarla returns home and tells Janki that she didn’t find Preeta at Luthra house. Sameer hides from Sarla. Sarla asks Shrishti to come and have food. Shrishti makes excuses and sends her. She then rushes out with Sameer. Rana keeps Karan and Preeta in the same room, since they both are unconscious. He makes a leave.

Preeta gets conscious and is shocked to see Karan beside. She thinks she is hallucinating. She then confirms that its really him. She gets worried for him. She beats up Karan to bring him in senses. They have a moment of love. He feels love for her. Rishabh gets to meet the kidnapper’s boss. Prithvi scares him. Rishabh wants to know the demand. Prithvi doesn’t want Rishabh to identify him. He doesn’t speak up to hide his voice.

Karan tells Preeta that he has come to save her. He then changes his tone and scolds her for putting Rishabh in danger. He wants to meet Rishabh. Preeta tells that Rishabh is captive. He tells that he will save his brother. He blames her for not informing him about his brother. She yells at him that he didn’t answer his calls. They get into their regular fights. Prithvi tells Rana that he will meet Preeta first and then Rishabh. He meets Preeta and Karan. Karan provokes him for a fight.

Preeta tells Karan that the kidnapper is someone else and the masked man is the boss. Prithvi praises her smartness. Preeta tries to get the knife from him. Karan engages him in the talk. She asks Prithvi to come close, since she wants to give him some information. She wants to fight the masked man by stealing the knife. Karan thinks she has lost her mind. Prithvi gets glad. Karan asks Prithvi to get away from her.

Prithvi finds him getting jealous. He stops her from taking the knife. He can’t stop praising Preeta’s beauty and brains. Sherlyn arrives there to alert him about Karan. Prithvi looks for Rana. Sherlyn meets him and shocks him. She tells him about Karan. Rana didn’t know that Sherlyn is Prithvi’s wife. He realizes that Prithvi is after two women. Guddan reaches the place, where Rishabh, Karan and Preeta are kidnapped. She hears Prithvi’s confession that he has kidnapped them. Sherlyn asks Prithvi not to joke. He tells that he will not let the day go waste. Guddan thinks who has kidnapped Karan Luthra.

She wants to help Luthras. She meets Sameer and Shrishti and gives them the hints about kidnappers. They get thankful to Guddan for the information. Guddan goes on Akshat’s call. Shrishti asks Sameer to find Preeta. Karan and Preeta shout for help. Preeta finds hard to share the room with Karan. She reveals her plan to Karan. Their blame game doesn’t end. Preeta learns that Shrishti has informed Karan about the situation. Sherlyn tells Prithvi that Luthras are aware of Rishabh’s kidnapping, Preeta will save Karan and Rishabh and get back in Luthras’ good books. Prithvi doesn’t think Preeta can win.

Prithvi and Sherlyn argue further. Sherlyn feels insulted. Rana gets slapped by her. She waits for Prithvi’s return. She doesn’t want Rishabh to see her. Prithvi meets Rishabh again and demands his property. Rishabh agrees to give him money. Prithvi gets hopeful. Mahira wants Sherlyn to help her. Sherlyn lies to her. Mahira insists to know. Sherlyn tells her that she is not at home. Mahira gets stuck at the same thing that Preeta kidnapped Rishabh to stop Karan’s marriage.

Sherlyn finds Sameer and Shrishti searching the place. She hides from them. Problems increase for Prithvi. Sherlyn wants to take charge and help Prithvi. Karan gets another chance to blame Preeta for Rishabh’s state. He then finds Prithvi and accuses him. Preeta doesn’t think that Prithvi can kidnap Rishabh and supports him. Karan and Preeta get finding the truth against Prithvi. Watch the promo below, and keep reading.

Reviewed Rating for this particular episode Kundali Upcoming Spoiler Masked Prithvi repeats the evil: 5/5
This rating is solely based on the opinion of the writer. You may post your take on the show in the comment section below.