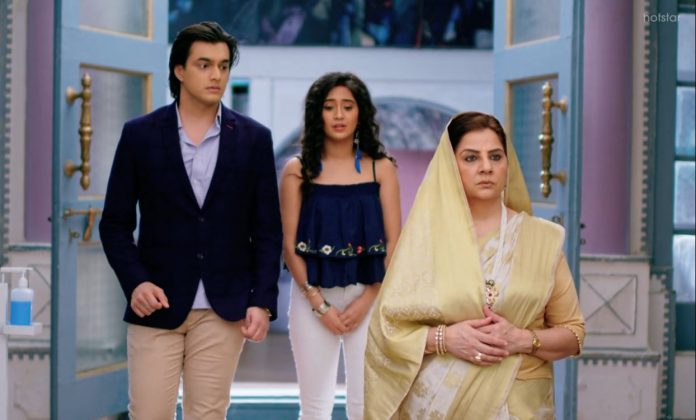 YRKKH 16th July Hilarious act by Kaira and Goenkas Naira turns worried when Kartik calls her Naira in front of Sita, when she is trying to prove that she is Tina. She lies further that Kartik is asking her to end the argument for the sake of Naira. She tells that she will not stop for anyone’s sake. Sita gets to hear her misbehaving talks.

She tells Kartik that he should give some sense to Tina. Kartik doesn’t like to lie to Sita. He wishes that Naira never thought of this twin sister’s idea to cheat Sita. He can’t help Naira either. Naira manages the problem alone by her dramatic liners. She acts like a rebel. She opposes Kartik as well. Sita tells them that she can’t be convinced easily, she will bring out the truth by taking them home to see if they can really meet Naira there in the presence of Tina.

This shocks Naira a lot. Naira didn’t expect Sita to expose her truth. She thought Sita would believe her, give the funds to Goenkas and never meet her again. Kartik fails to stop Sita. Naira tries hard to tell Sita that she won’t visit Goenkas for her sake. She asks Kartik to drop her home. Sita doesn’t listen. She gets inside their car by moving Kartik aside and drives them home. Kartik and Naira get worried on the way to home, thinking how would they manage to arrange another Naira. Kartik gets Dadi’s call, who wants to talk about Naira.

He struggles to disconnect the call before Sita gets to hear the truth. He messages Manish to ask for help in arranging Naira and Tina’s avatars together. Manish and Akhilesh get to work. Manish checks some files. He misses to see the message. Kartik wishes that the family makes some arrangements. Naira doesn’t want her lie to cost a lot. She tells Sita that she is looking for a job, so that she can earn money for herself. Sita finds her totally opposite of Naira. She still wants to clear her confusion.

Sita finds Kartik getting uneasy. She asks the reason, but he lies to her. Sita makes an entry in Goenka mansion. This time, she gets Kartik and Naira along. The moment gets tough for Goenkas, who think Naira’s lie has been exposed to Sita. They think to apologize to her and explain the need of the funds. Naira stops them from accepting the mistake. She continues her lie. This gives them a hope. Dadi doesn’t think Naira is doing anything wrong to save their sinking business. Dadi plays along with Naira. Dadi tells Sita that Tina is really ill-mannered, none can tolerate her for long time. She asks Tina to leave from the house right away.

Naira tells Dadi that she doesn’t want to stay back and see her face, which is just upsetting her. Sita sees the huge argument between Dadi and Naira/Tina. She can’t believe that Tina disrespects Goenkas so much. She asks Tina to stop the drama for once and just call Naira in front of her. She wants to see both the twins together to make it believable. Naira gets into a big fix. Dadi feels Sita will ultimately catch the lie. She goes away to her room to make prayers for Naira, who is leading this lie for their sake.

Naira as Tina lies that Naira is inside the room and she will herself go to talk to her. Sita questions if Naira and Tina exist at the same time. Naira sounds confident to end her doubts. She stops Sita from going to Naira and runs to her room to change her avatar. She thinks to get into Naira’s avatar, but faces a problem to get Tina at the same time. Kartik runs to Naira to help her. They both try to find some idea to create the twins in front of Sita and end her doubts. Sita thinks Tina is taking a lots of time.

She herself goes to Naira’s room, when Goenkas fail to stop her. Goenkas prepare to get caught and apologize. Sita tells them that its her duty to make the sisters patch up. She looks for Naira. Kartik finds a solution. Naira enacts as Naira and Tina, while changing her tone a bit. She misleads Sita into believing her twin avatars. Sita gets convinced that Tina is Naira’s twin. She then finds out that Kartik is having an affair with Tina, by cheating Naira. She visits Goenka house to alert Naira about her sister’s cunning act.

Reviewed Rating for this particular episode YRKKH 16th July Hilarious act by Kaira and Goenkas: 5/5
This rating is solely based on the opinion of the writer. You may post your take on the show in the comment section below.