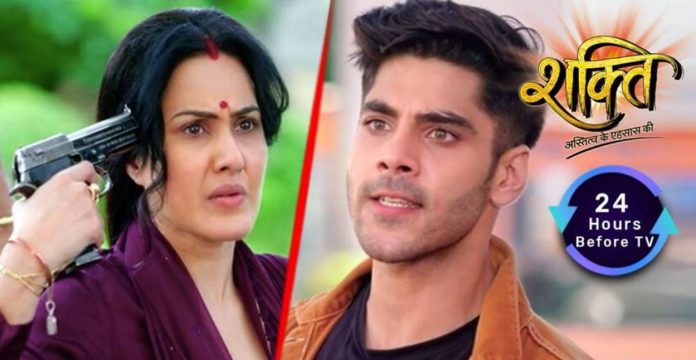 Shakti Latest before TV 23rd July 2020 Preview Heer reaches Virat’s house to get his answers. Virat stays in his room. Parmeet opens the door and finds Heer shattering. She doesn’t show any sympathy. She asks Heer what happened to her. Heer asks them what happened to Virat, what did they do with him. Sant Baksh tells that Virat is his son, he doesn’t belong to her. She wants to talk to Virat. Virat hears her shouting. He doesn’t want to talk to her.

He had promised Heer’s grandparents, else he would have told her truth to everyone. Soham asks Sant why didn’t they get the baraat. Sant tells that they forgot, since they didn’t want the marriage to happen. Soham and Heer get insulted by Virat’s family. Parmeet tells that Virat doesn’t want to marry Heer, he doesn’t want to see her face or talk to her. Heer wants to confront Virat. When Daljeet goes to hit her, Soham comes in between and stops him. He scolds them for making Heer wait for the baraat and deceiving her.

Sant asks him not to misbehave with them. Parmeet tells Heer that Virat doesn’t want her in his life, he has told this to them, its his decision. Gurinder cries for Heer. Heer tells them that Virat promised to marry her. Soham rages on seeing the wrong happening. Gurinder asks Virat to just come and meet Heer, everyone is insulting her. Heer tells Parmeet that she wants Virat to talk to her once. Sant slaps Soham angrily. Heer worries for her brother. Gurinder tells Virat that Heer won’t go without meeting him.

She asks him to just come once. Virat stays angry. His heart doesn’t melt on hearing Heer shouting. Parmeet tells her that Virat doesn’t love her. She tries to throw out Heer. Heer tells that Virat loves her, she won’t leave. She challenges Parmeet to stop her. She rushes to Virat. He stops Heer from coming to him. Heer tells him that she was waiting for him, but he didn’t come. Virat tells her that he doesn’t want to marry her. She can’t believe it. He tells that he expected her to understand it on her own. She asks the reason for it.

He tells her that its her mistake. She apologizes to him. Soham cries for her. She asks him why did he break his promise. She reminds that they had consumed the poison for the sake of their love. He gets helpless and keeps his promise to Preeto. Heer asks Virat to answer him. He hates her touch knowing she is a kinner. He makes her away and warns her. Heer gets a shock by his behavior. She reminds that it was their marriage today.

He tells that he has decided to not marry her. Gurinder asks him to tell the reason for his decision. She also feels that he is wrong, Heer’s question is justified. Virat tells that Heer has no right to ask him anything, he hates her. His parents get happy. He lies to her that he loved her to fulfill a bet, he had to take revenge on him, since her brothers insulted him. He tells that his love was fake, he wanted to take revenge on her, he likes to see her helpless now. He turns stone-hearted.

He insults Heer and breaks her heart, just like Preeto asked him to do. Soham asks Virat why is he taking revenge on Heer. He begs Virat to forgive him. Heer doesn’t want Soham to beg to Virat. She stops him. She asks Virat why is he lying, they love each other a lot. Virat tells that he had consumed the poison to do the drama, it wasn’t real, he knew his family won’t let him die. Sant feels proud of his son. Virat tells that he wanted to make her cry and also punish her family. She asks him what is he hiding. She wants him to swear to her that he never loved her.

Virat tells that all their promises were fake. He burns her gifts and letters. He asks her not to taunt him about the fake promises of marriage. She gets heartbroken. He swears on Heer that he can’t love her after knowing her truth.

Reviewed Rating for this particular episode Shakti Latest before TV 23rd July 2020 Preview: 2/5
This rating is solely based on the opinion of the writer. You may post your take on the show in the comment section below.