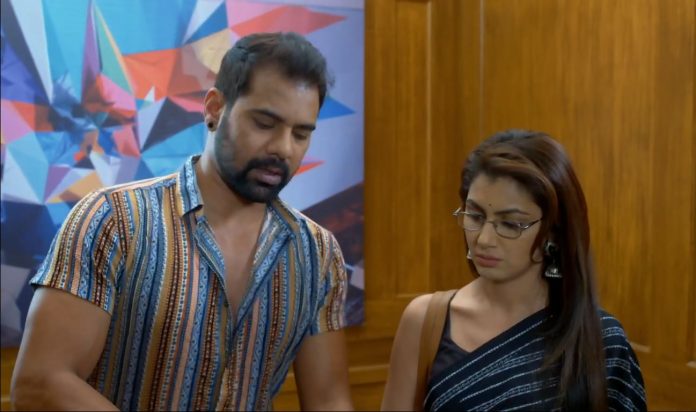 Zee5 Club Kumkum Bhagya Upcoming 29th July Update Abhi and Pragya try to get help from the liftman. Abhi tells her that they shall not fight now. She tells that she doesn’t want to talk to him. He tells that they can make new memories if she answers his calls. She tells him that he didn’t call her. He tells her that he has saved her contact details and called her many times. She wants to check his phone. She tells him that the number he saved by his name isn’t her number. He gets puzzled.

Prachi tells Ranbir that Maya’s mum has threatened her about their families. Ranbir gets into an argument with Maya’s mum. He tells that Prachi is his good friend. Maya’s mum tells him that he may love Prachi but he shouldn’t be concerned for Prachi once he gets married to Maya. Ranbir and Prachi get emotional. They can’t break their relationship, though their feelings are still unspoken. Maya’s mum scares him of Chobey and Dushyant’s anger.

She asks them to act sensible and just change their heart. Ranbir and Prachi think Rahul is the solution for their problems. Pallavi asks Dida what is she doing to stop the marriage. Dida tells that she is trying to put up a good act. She explains that she has been fooling Maya by being sweet towards her. Dida tells her that Maya told her a lot of her childhood tales. She knows that her plan will work out. She asks Pallavi to help her. She wants Pallavi to fight with her in front of Maya. Pallavi likes her plan. Meera manages things.

She tells Ranbir that Dushyant was looking for him. Ranbir gets raging. Prachi asks him to calm down and stay good with Dushyant. She handles Ranbir well. Meera likes them as a couple. Ranbir feels Prachi always calms her down. Meera questions Prachi about her relationship with Ranbir. Prachi tells her that they have a plan to stop the marriage. Meera doesn’t want her to reveal the secret. She also hates Maya and her family, who is troubling Ranbir so much. Pragya tells Abhi that he has saved wrong number. He asks her why did she give wrong number to Purab. She tells that she used to call him, but he used to disconnect the number.

He tells her that he didn’t get any missed calls, else why would he do that. He gets scared of the darkness in the lift. Pragya laughs on him. Abhi admits that he is scared. She tells him that lift will get working in some time. She calms him down. She tells him that they will not fight now. He gets negative feelings. She stops him from thinking bad. She asks him to not panic. She reminds him the times he used to panic. She tells him that there is always a good thing behind the bad things. He tells her that she is his inspiration for his songs. They laugh reminiscing their good memories. He asks her why did she leave from his life.

He wishes that she could always live with him. He gets upset. Vikram tells Aryan that they will have to treat Maya’s family better, even if they don’t like them. He makes a plan to trouble them. Aryan tells him that he will also manage the situation. Vikram sends Aryan to bear irritating Chobey. The mall manager tries to get the technician to help Abhi and Pragya. He apologizes to his wife on the call. He gets busy on the call.

He tells her that some people’s lives are in risk, he will talk to her later. Aryan meets Chobey and Dushyant. He tells them that he is Ranbir’s best friend. They like his hospitality. Shahana thinks Aryan is stuck there. She wants to save him. Dushyant tells Aryan that he knows a girl who would be the best for him. Aryan doesn’t want him to fix his alliance. He tells Dushyant that he has a girlfriend already. He shows Shahana and lies to them. Shahana gets angry on him. Aryan tells them that he will convince his girlfriend and come. Shahana scolds him. He tells that he had to lie out of fear, since Dushyant was fixing his marriage.

He jokes on her that she isn’t his type. Ranbir finds Maya’s mum informing the family that Prachi will break her friendship with Ranbir. Dida asks Maya’s mum to come and meet their guests. Ranbir is glad that Prachi will never break their friendship. Abhi tells Pragya that everything could be the best if they were together. She tells him that the situation was wrong, they were not at fault, she was too angry and didn’t take the right decision. He tells her that she was much sensible than him, she shouldn’t have limited her anger and saved their future. They miss Kiara a lot and cry.

Source credit: Zee5 Club
Reviewed Rating for this particular episode Zee5 Club Kumkum Bhagya Upcoming 29th July Update: 4/5
This rating is solely based on the opinion of the writer. You may post your take on the show in the comment section below.