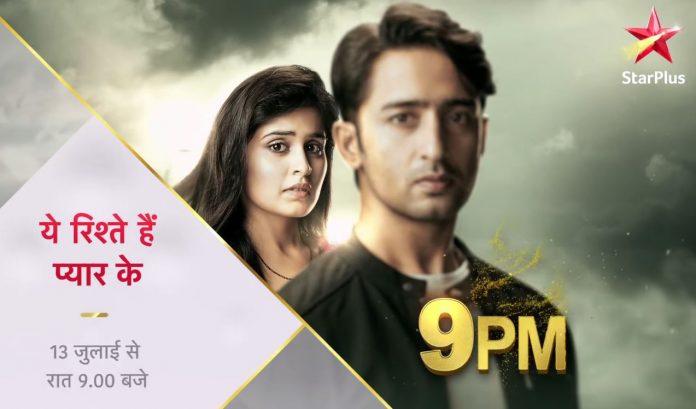 Rishtey Pyar Abir fights for family 28th July 2020 Varun tests Abir for the truth again through his humour. Abir tells him that he will always be an elder brother for him. He doesn’t want Varun to know his brother’s ugly truth that he was a molester. Varun tells him that he misses Karan a lot and wants Abir to guide him from now. Abir promises to be always there for him. He tells Varun that Kunal is a better brother for Ketki than him. He misses Kunal.

Meanwhile, Varun’s mother Nirmala initiates a disturbing talk by targeting Mishti. She tells Meenakshi how much she misses her son. She asks Meenakshi why is her son leaving her, is it because of Mishti. She tells that its really sad that Abir is with the family, still distanced from hearts. She then taunts Mishti for being a home breaker. She tells them that Mishti will be blamed if Abir leaves the house.

She asks Mishti to explain Abir to not leave the house, else the society will not spare her and accuse only her. She tells that she doesn’t want Ketki to learn this from Mishti and make Varun leave the family. She tells that she can’t imagine life without Varun. She knows that Abir is also much important for the family, but Mishti is taking him away. She asks Mishti to change Abir’s decision if possible, they should attend Ketki’s marriage to shut up the society’s growing questions on them. She doesn’t want any nuisance in Varun’s marriage.

She indirectly insults Mishti for breaking Rajvansh family and running away. Meenakshi lets Nirmala insult Mishti, since she also wanted to tell her the same. She is glad that someone is showing the mirror to Mishti. Nidhi tells Nirmala that Mishti wasn’t raised by her parents, she was adopted by Maheshwaris. Nirmala tells them that she knows everything about Mishti and really pities her, once Abir leaves the house, the society will speak ill of Mishti and Maheshwaris as well. She asks Mishti if she wants Maheshwaris’ name to get ruined.

Mishti gets speechless. She hears the humiliating words and stays silent out of respect for elders. Just Abir understands Mishti. He hears Nirmala’s bad taunts on Mishti. He stops Nirmala from insulting his wife further. He takes a stand for Mishti, when the entire family just becomes onlookers, except Parul, who defends Mishti. Abir gets rude in answering Nirmala, who doesn’t spare him either. He doesn’t want Nirmala to hurt his wife’s emotions. He tells that its his decision to leave the family, Mishti didn’t tell him.

He clears Mishti’s name from the mess. He feels sorry that his mum and family didn’t speak up for Mishti and let her cry because of Nirmala’s taunts. He opposes Nirmala totally. Meenakshi tries to control him. Nirmala and Abir have a heated argument. Nirmala calls off the alliance. She tells that Varun won’t marry Ketki, there won’t be any marriage happening now. Varun tries to explain Nirmala that he has to marry Ketki. Varun tells Nirmala that they can talk out. Nirmala ragingly leaves from there. Abir and Mishti get blamed for getting Ketki’s marriage ruined. Varun calms down Nirmala and asks her to reconsider her decision.

Mishti wants to know why is Abir complicating relations by being so stubborn. She tells him that she wants to stay back with the family and attend Ketki’s marriage. He dreams of revealing the truth to Mishti and seeing her break down. He dreams to tell the truth of Karan’s family, that Karan is Varun’s brother, once the truth comes out, Nirmala won’t spare her. He can’t see Mishti shattering. He thinks to conceal the truth for long. Mishti gets upset that Abir isn’t understanding her. She just wants to be with the family and enjoy the functions. Abir fears that Karan’s truth will come out and then Mishti’s panic attacks will prove her wrong in front of Karan’s family. He can’t afford to lose Mishti.

Ketki blames Abir for always thinking of Mishti. She faints down while talking to Varun on the video call. Varun gets a doctor to her home. The family rushes to Ketki. Ketki’s pregnancy news comes out, which gets shocking for them. Varun asks the family to speak to Nirmala and fix the marriage. He takes the responsibility of his child. Abir heads to apologize to Nirmala. She criticizes Ketki’s character and further angers him. He gets close to reveal the ill character of her dead son Karan. How will Abir balance things and protect Ketki and Mishti? Keep reading.

Reviewed Rating for this particular episode Rishtey Pyar Abir fights for family 28th July 2020: 5/5
This rating is solely based on the opinion of the writer. You may post your take on the show in the comment section below.