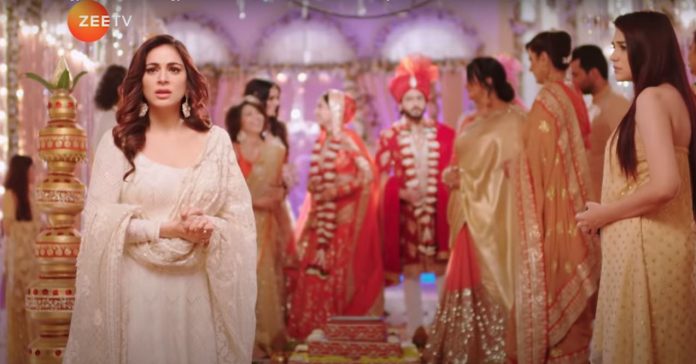 Kundali Bhagya Promo Update Preeta fulfills challenge 30th July 2020 Rishabh learns from Sameer that Preeta is coming to attend the marriage. Sameer tells him about Shrishti’s call. Rishabh doesn’t want Shrishti and Preeta to come and bear the insult. He asks Sameer to tell them about the problem. Sameer tells that Shrishti never listens to him. Karan still in his ego gets mad at himself for not being able to forget Preeta. He tells himself that he is ready to marry Mahira. Preeta tells that she will go to attend Karan’s marriage.

Shrishti asks her to inform Sarla. Preeta tells the family that she wants to attend the marriage and prove to Karan that he doesn’t matter to her. Sarla and Janki ask Preeta not to go. She tells Sarla that she isn’t heartbroken, Karan wants to insult her, she has accepted his challenge and wants to show her courage to him. She tells that she will defeat Karan by outdoing him. She wants Sarla to permit her to attend the wedding.

She tells that she has become strong with time, she has taken the decision, she won’t be hurt. Sarla asks her not to hurt herself by going there. She feels Luthras never deserved her, they always disrespected her. Preeta tells that she wants to clear Karan’s misunderstanding, she doesn’t want to take Mahira’s place in his life. She wanted to save Karan from evil Mahira. She tells that if Karan doesn’t care, then even she shouldn’t care.

Preeta tells that Karan isn’t important to her. Sarla tells her that she shouldn’t to go him and remember his big deceive, since he married her and dumped her. Preeta tells that she wants to show that she has changed. She requests Sarla to let her go and not assume her weak. Sarla permits her to go. Shrishti tells that she will accompany Preeta. Sarla blames Shrishti for brainwashing Preeta. She wishes Preeta stays protected from humiliation. She tells that she doesn’t have a big heart to meet Luthras.

She asks Preeta to attend the marriage if she wants. She tells that she will not support her daughters now, they are independent to take their decisions on own. She blames them for hurting her heart. Preeta asks Shrishti to get ready. Rishabh asks Karan why did he invite Preeta to insult her. Karan asks him to come to the point. Rishabh tells that Karan made a mistake again. Karan tells him that he didn’t dream of Preeta. Rishabh tells that he didn’t come to talk about that. He feels wrong that they didn’t support Preeta.

Karan doesn’t listen to him. He doesn’t believe his marriage with Preeta. He tells that none knows about the marriage. Rishabh questions his move to degrade Preeta. He shouts on Karan for being so wrong. Karan tells Rishabh that Preeta did a magic on them. Rishabh informs that Preeta is coming in his marriage, treat the guest politely. Karan is glad to know this. He wants her to see his marriage and cry.

Rishabh feels upset by his misdeeds. Karan threatens to do the worse and break Preeta’s heart. Rishabh pities him. Sherlyn overhears them. Prithvi praises Preeta’s smartness and bravery. He is happy that Preeta didn’t suspect him. He thinks to marry her. He feels Karan is really mad to leave a girl like Preeta. Karan asks Sameer to make the best preparations for the marriage function. Sherlyn wants to see Preeta’s insult. Karan finds Preeta in the wedding and wants to show her real place. Preeta feels he means nothing to her now and shows her happiness in getting rid of him. She keeps a smiling face and shocks Karan, who expected her to shed tears.

Reviewed Rating for this particular episode Kundali Bhagya Promo Update Preeta fulfills challenge: 4/5
This rating is solely based on the opinion of the writer. You may post your take on the show in the comment section below.