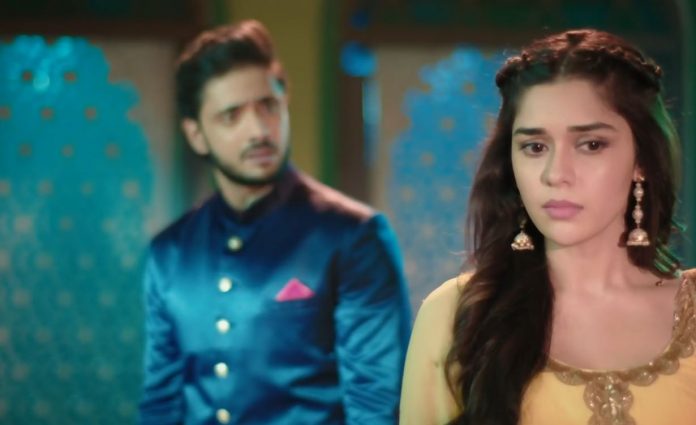 Ishq SubhanAllah Kabir Nargis dramatic row 6th August Zara gets disturbed by Kabir’s memories. She prays to get saved from the bad memories of her past. She wishes to focus on her music. Ruksar sends the attacker Sartaj to her house. Zara doesn’t realize the threat. Sartaj attacks the lady who calls Nargis for help. Sartaj realizes the lady isn’t Nargis. He finds Nargis and tries to kill her by smashing her with the huge boulder. Kabir reaches there in time and saves his Zara. Zara can’t believe that its Kabir, who has come to save her. Kabir asks her if she is fine.

The attacker runs away. Zara doesn’t want to face Kabir. Kabir runs after the attacker, but misses him. He comes back to Zara. They both have an emotional outburst. Kabir wants to hold her hand and feel her. Zara gets distant from him. He wants to know the reason for her estranged behavior. He thinks she has forgotten him. He tells her that he didn’t forget her, their relation is of souls. He asks her why is she running away from her family. The lady gets conscious and finds Kabir in her house.

She asks Nargis if she is fine. Zara tells that she is absolutely fine. Zara thanks Kabir for saving he life. She introduces herself as Nargis. The lady is glad that he came on time and saved her daughter. Kabir apologizes to her. He tells her that Zara is his wife. The lady realizes their relation. Zara tells that she is Nargis, he can see the id proof and get satisfied. He gets to see her house, filled with musical instrument. She presents the id proof to Kabir. He sees Zara’s pictures with the lady. He doesn’t get convinced. He tells that she is lying.

She tells him that he is a liar, he got her attacked and then saved her to create a good impression. Kabir tells her that he doesn’t lie, he has come to save her since she is his wife. She doesn’t want him to call her Zara. He asks if she is running away from him. He wants to know the reason. She asks him not to anger her. She plays music and calms herself. Kabir gets irritated by the music. She tells him that her music is to heal the illnesses, he can’t even tolerate it. He asks her to accept that she is Zara.

He tells that she has the same face, voice and mannerism. He tells that she didn’t change in all these years. He asks her to come along with him. She doesn’t listen to him. She tells that they belong to different worlds, she will never enter his world. He doesn’t know the reason for which she is calling him a liar. He tells her that she will fall for him again and come to him herself, since she is destined to be of him. He lets her free and asks her to take care. Kabir calls Imran and tells him that Zara lied to him about her identity.

He asks him to find out who has attacked Zara. He wants Imran to provide protection to Zara. Ruksar asks Sartaj why couldn’t he do the work. Sartaj tells her that Kabir had come to save Zara. Sartaj is Zara and Kabir’s enemy. He doesn’t want to get caught by Kabir. He hides the secret that he is Miraj and Siraj’s brother, who has come for revenge. Ruksar asks him to kill Zara. He tells that he wishes that girl is Zara, so that he exacts his revenge. Ruksar tells Zeenat that Zara’s lookalike will be soon dying. Kabir meets Zara again and asks her to help him in curing Salma. He tells her that Salma got to know that she is alive. He wants her to come along and meet her mum, who is dying to see her. What will Zara do? Keep reading.

Reviewed Rating for this particular episode Ishq SubhanAllah Kabir Nargis dramatic row 6th August: 4/5
This rating is solely based on the opinion of the writer. You may post your take on the show in the comment section below.