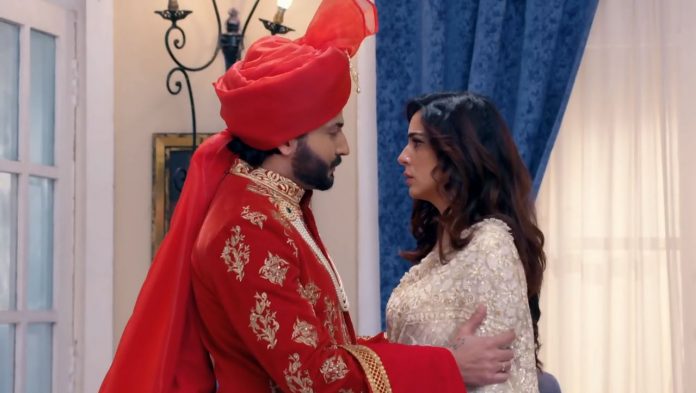 Kundali Bhagya Update Preeta learns shocking conspiracy Rishabh’s shocking statement gets disturbing for Sherlyn’s mother Sanjana. Rakhi tells Sanjana that Rishabh and Sherlyn had a fight and maybe he is still upset with her. Rakhi asks Rishabh to forgive Sherlyn and move on. Rishabh tells her that he will forget the matter, he will forgive Sherlyn, he doesn’t keep annoyance for a long time.

He thinks Sherlyn isn’t the kind of girl that he wanted to marry. Mahira hides something. Sherlyn asks her what is she hiding. Mahira tells that she wants to celebrate her wedding. She gets the alcohol. Sherlyn asks her not to get drunk. Mahira drinks the wine. She thinks Preeta will lose to her. Preeta wants the wedding to end soon so that she goes home to Sarla. Kritika apologizes to her. She doesn’t like whatever is happening with Preeta. Preeta tells her that she is lucky to attend a celebrity’s wedding. Karan hears their conversation.

He insults Preeta and asks her to remember that she is just an ordinary girl for him. He tells that he had invited her to attend his wedding just to see her real emotions. He asks her about her missing earring. Preeta realizes that her earring fell in Mahesh’s room. She thinks to go and get it. Karan and Preeta have an argument about their big egos. She tells him that she doesn’t care whatever he thinks. Sherlyn gets Mahira to Mahesh’s room.

She hides the wine bottle and asks Mahira to come with her. Mahira gets wicked. She tells that she is tensed that Mahesh can wake up and tell her truth. Sherlyn asks her not to worry. Mahira fears that he will expose her truth. Sherlyn asks him to get up, but his fate is really bad. Sherlyn introduces Mahira to Karan. She tells that Mahira is getting married to Karan, he can’t stop the marriage even if he knows their evil truth. Preeta hears their planning. Sherlyn tells Mahira that they will kill Mahesh after the marriage.

Shrishti catches Sameer and calls him a coward. She scolds him for running away. He calls her mad. She tells him that she is smart enough to know that Karan doesn’t love Mahira. She asks him to help her in stopping the marriage. Sameer tells that it got too late. She asks him to think positive if he respects love. She tells Sameer that once Karan gets his senses, he will slap him and ask why didn’t he stop her. Sameer agrees to help her. He admits that he likes her a lot. She tells that she has no plan against Mahira.

She feels bad that Preeta was crying all the night. She asks him to brainstorm and find some good idea. Sherlyn and Mahira are scared that Mahesh will expose their crime. They both admit to have attacked Mahesh before to kill him. Sherlyn tells that they can end their fear and sort their life by killing Mahesh. Mahira asks if they shall kill Mahesh today. Sherlyn tells that if Mahesh dies today, then the marriage will get delayed for a year. She tells that they will kill Mahesh once the marriage gets done. Preeta gets a huge shock on knowing this.

Mahira tells Sherlyn that they shall inject poison to Mahesh to keep him in coma. Sherlyn tells that the poison will kill him. Sherlyn agrees to delay her plan. Sanjana worries that Sherlyn might be up to some plan. Preeta meets Mahesh and tells him that Sherlyn and Mahira are planning to kill him. She wants to save his life. She realizes that his life is in danger, they will try to harm Mahesh. Karan meets Preeta and tells that he was missing her. Preeta thinks to tell him the evil plotting of Sherlyn and Mahira. She isn’t sure that Karan will believe her. What will Preeta do to save Mahesh’s life? Keep reading, comment your opinion on the show’s track and share the post if you like it.

Reviewed Rating for this particular episode Kundali Bhagya Update Preeta learns shocking conspiracy 7th August 2020: 4/5
This rating is solely based on the opinion of the writer. You may post your take on the show in the comment section below.