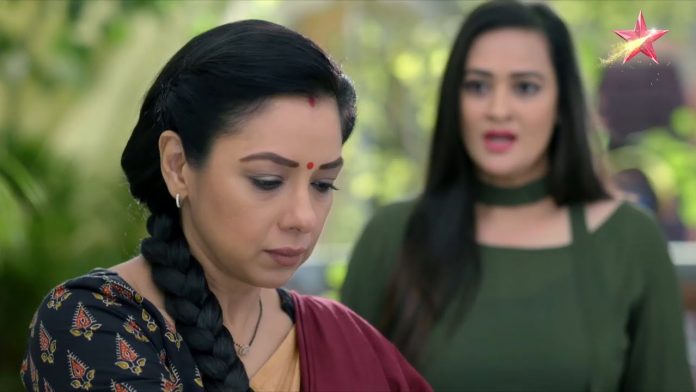 Vanraj tells that Anupama didn’t tell him anything before. Devika feels that Anupama works a lot, but none in the family cares for her. She wanted Anupama to dine with them. Vanraj goes to talk to Kavya. She requests him to sing a song. He is jealous of Anirudh. Kavya tells him that Anirudh is intentionally troubling him. She comforts Vanraj, who sings a song for her. Anirudh finds her sleeping and takes the phone to talk to Vanraj.

He gets teasing Vanraj. He hopes that Kavya returns to him. Vanraj doesn’t want to lose Kavya, whom he dearly loves. Devika tells Anupama used to dance so well that everyone liked it a lot. She insists Anupama to dance on a hindi song. She praises Anupama’s dancing skills. Anupama’s children request her to dance. Anupama dances with them. They enjoy well. Devika reveals Anupama’s secret, that a guy Anuj was in love with her, but Anupama wasn’t aware of his feelings, she fell for Vanraj when his alliance came. She tells that Anupama is a shy person since always.

She shares Anupama’s tales. Vanraj overhears them and misunderstands. He thinks if Anupama is regretting to marry him. Devika tells that Anupama loves Vanraj and he is her world. Devika wants Anupama to live her life as well. She thinks she is working like a machine and not thinking of herself. She asks Anupama if she doesn’t get tired. Anupama finishes her work. She tells that she loves her family, love doesn’t let her feel tired, she is devoted to them. Devika asks her if she is happy. Anupama tells that she is much happy with her family.

She goes to Vanraj, who questions her if she would have married Anuj. Anupama tells him that she didn’t even notice Anuj. She tells that she just loves him. Vanraj gets glad to know it. She clears his misunderstanding. Vanraj gets tension free. He goes to meet Kavya. Devika finds his relation a step ahead of friendship. She alerts Anupama, who takes it otherwise.

Reviewed Rating for this particular episode Anupama StarPlus Update Preview 11th August 2020: 5/5
This rating is solely based on the opinion of the writer. You may post your take on the show in the comment section below.