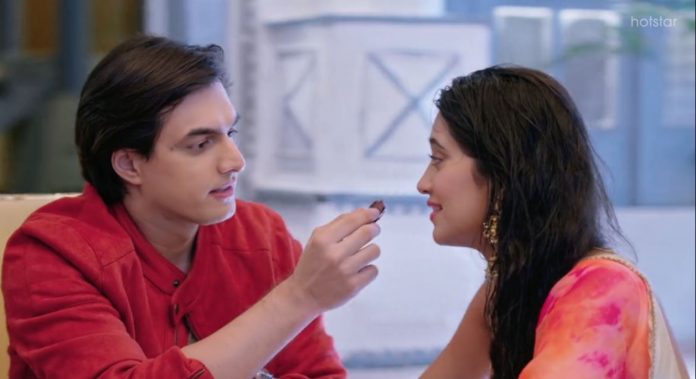 YRKKH Huge Teej drama lined 11th August 2020 Naira tries to speak to Kartik, but he distances himself. He doesn’t speak his heart out. He makes an excuse and goes away. Naira wants him to express himself. She feels he is much angry at her. She doesn’t wish him to stay upset and hurt himself. She is grateful that Manish and she are safe and not too injured after the accident. She blames herself for the accident.

The family asks her not to blame herself, since everything is destined, accidents aren’t in anyone’s control. Dadi asks Naira not to go against Kartik and upset him next time. She tells that its better to listen to family. Naira feels guilty. Suwarna asks her to stop feeling guilty. Devyaani meets Goenkas. She gets Sargi for Naira and Gayu’s Teej. She enquires about Manish’s health. Suwarna tells that Manish is recovering. Naira sheds tears that Kartik is upset with her. Naksh finds her crying and asks her the reason.

He learns that Naira is hurt by Kartik’s silence. He explains that Kartik isn’t angry on her, he is just dealing with the fears of losing his loved ones. He asks her to give some time to Kartik, he is hurting her unknowingly, but will soon realize it. He asks Naira not to misunderstand Kartik. Kartik really cares for Naira. He worries for her injury. Naksh tells Naira that Kartik will soon come up and talk to her. Naira gets hopeful.

Naksh asks Naira to prepare for Teej. Naira finds Kartik worried for Manish. Kartik expresses his emotions while Manish is sleeping after taking the medicines. Kartik doesn’t want to stay away from Manish. He can’t see him hurt. He apologizes to Manish. He cries a lot. He conceals his tears when he meets Naira. Naira is hurt, but doesn’t dress her wound. Kartik helps her do the aid. He doesn’t talk to her. They act to fall asleep, and don’t talk to each other. They stay upset. Naira goes to have her Sargi. Dadi blesses her Bahus.

She tells them that she has prepared the food, since Naira and Suwarna were busy. Naira wishes that Kartik comes to her and makes the Teej special. She gets daydreaming and smiles. Naira goes to kitchen and finds Kartik there. Dadi tells that Kartik would be sleeping, he is much worried for Manish. Kartik tells Naira that she isn’t dreaming, he got late, but he has come for her sake. He tells that he is also keeping a fast for her long life. He asks her to forget everything. She apologizes to him. They have food together and keep the fast. They meet the family and enquire about Manish. Manish also wakes up early and meets the family.

He tells that he is absolutely fine, its some drowsiness after taking the medicines. Kartik finds him behaving fine. He informs the doctor that Manish is fine and there is nothing weird occurring. Doctor tells that its a good sign, but he can confirm everything once he checks the reports. The family asks Manish to get ready for the Teej fast. Manish behaves weird and turns kiddish. He likes to see the toys pictures. He gets mentally unstable. Kartik feels romantic on seeing Naira decked up for Teej. A huge drama is going to occur when Manish acts kiddish and shocks the family.

Reviewed Rating for this particular episode YRKKH Huge Teej drama lined 11th August 2020: 5/5
This rating is solely based on the opinion of the writer. You may post your take on the show in the comment section below.