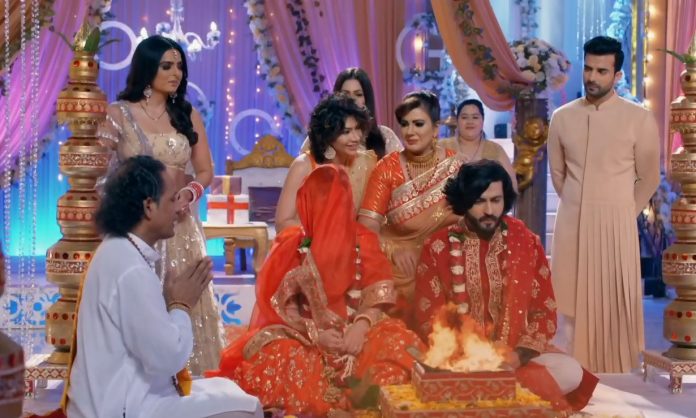 Kundali Bhagya Update 19th August Karan Preeta wedding Shrishti attends the wedding and is upset for Preeta. Karan and Preeta get ahead with the rituals. Preeta doesn’t want Karan to know that she is his bride. She thinks when Karan doesn’t know her heart, then she won’t recognize her hand. Sherlyn wonders why Mahira isn’t giving her hand, if she is in her senses or drunk. Preeta gives her hand to Karan. Karan senses her, but thinks he is just imagining it. He feels suffocated and dizzy. This makes the family worry for him.

Sherlyn gets angered that the marriage is delaying. Rishabh asks him to take a break and resume rituals later. Karan tells that he can manage it himself. He doesn’t want any further delay. Preeta feels he is desperate to marry Mahira. Shrishti doesn’t wan Karan to get out of the medicine effect by consuming the lemonade. Ramona goes to lift Mahira’s veil and serve her the lemonade. Preeta gets too tensed.

Shrishti tells Sameer that Karan can’t go ahead with the marriage, if Karan drinks the lemonade, then he will be in his senses, he will marry Mahira. She asks him to give another pill to Karan so that he faints during the rituals. Sameer tells that Karan will suspect them if they serve him another drink. She tells that she loves him. He gets glad. Sherlyn stops Ramona from seeing Mahira’s face, knowing Mahira is too drunk. Preeta gets saved because of Sherlyn. Ramona asks Sherlyn about her excuse.

Sherlyn tells her that Mahira is drunk, if her veil gets down, then everyone will know that she is an alcoholic. Ramona gets worried and thanks Sherlyn for saving Mahira. Sherlyn tells that Mahira is too careless and didn’t think of her marriage. Karan and Preeta prepare to take the marriage rounds. They exchange the Varmala. Preeta gets recollecting her marriage with Karan. He also misses her, but stays silent. Sherlyn thinks she will kill Mahesh and get everything in her hands. Rakhi blesses Karan and Preeta with all her heart.

Sherlyn looks for Shrishti and Sameer. Mahira regains consciousness. She looks for Sherlyn. She realizes that Preeta has hit her and locked her in the room. Shrishti is sure that Preeta is much hurt and pretending to be happy. She asks Sameer why is he helping her, when he is Karan’s brother. She reminds that he should be loyal to his brother. He tells her that he knows that Karan is wrong, he did much wrong with Preeta, he loves Karan, but wants to support the right thing. He tells that they both want Karan to realize his true love for Preeta.

He is sure that Karan will thank them to break the marriage with Mahira. He wishes that Karan pays respect to Preeta and accepts their marriage. Shrishti wishes that his words turn true. Sherlyn catches them and asks their planning. Mahira tries to reach Sherlyn and get help. She finds it hard to leave the room. Sherlyn and Shrishti have an argument. Sherlyn tells that Karan is marrying Mahira. Mahira gets worried. She isn’t able to get up or shout. She tries to get Sherlyn’s attention. Sherlyn laughs on Shrishti and Preeta for their defeat.

Reviewed Rating for this particular episode Kundali Bhagya Update 19th August Karan Preeta wedding: 5/5
This rating is solely based on the opinion of the writer. You may post your take on the show in the comment section below. 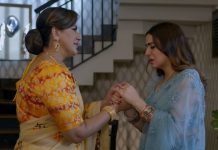 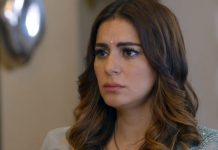