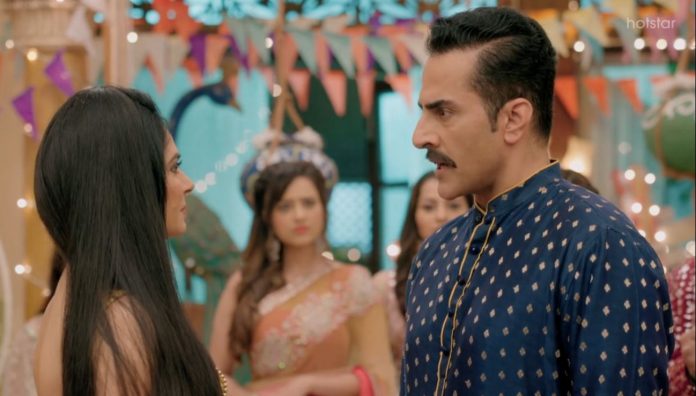 Anupama Update Shocking twists 19th August 2020 Rakhi doesn’t limit her tongue and goes on to insult Anupama. She doesn’t want Shah family to end Kinjal’s individuality by ending her career. Samar can’t see his mum’s insult, but doesn’t say anything in front of elders. Rakhi humiliates Anupama in front of the family and guests. Anupama stays silent and bears it all for Paritosh’s sake. Vanraj breaks his silence on seeing Rakhi crossing her limits. He stops her from uttering any nonsense about his wife.

He reprimands her for insulting his wife. He doesn’t want Rakhi to test his patience. He shouts in loud tone and lectures her to make her know about Anupama’s values. He sings his wife’s praise and takes a stand for Anupama. He tells Rakhi that Anupama isn’t educated, but she is more sensible than her. He makes Rakhi know her mistake. Rakhi and Vanraj get into a bitter argument. Paritosh and Kinjal fear that their parents’ clash will end their alliance.

Vanraj tells Rakhi that they won’t respect her from now, if she can’t pay them any respect. He wants to decide about Paritosh and Kinjal’s relationship. He tells that Anupama would also decide, being Paritosh’s mum. He rebukes Rakhi further for having such a small mindset. She questions him about introducing Kavya to them and not telling about Anupama. She asks him if he was equally embarrassed of her illiteracy. Vanraj gets speechless.

Rakhi ends Paritosh and Kinjal’s alliance, after receiving the insult from Vanraj. Anupama tries to handle the situation. She wants Vanraj to stop Rakhi. Vanraj stops Anupama from falling low. Paritosh apologizes to Rakhi to fix things, but fails. He sheds tears and returns home, where Vanraj vents his anger on Anupama. Vanraj accuses Anupama for giving a reason to Rakhi for ruining the function. He gets tired of Anupama’s mistake. He tells that she had provoked Rakhi’s anger by her stupid behavior. He counts her mistakes. Anupama breaks down.

Vanraj tells that she is wrong to ruin the happiness in the family, she may soon break the family. He asks her to realize that she ruined Paritosh’s relationship and happiness. Paritosh feels the same. He also accuses Anupama for ruining it all. He wants to marry Kinjal at any cost. He loves her a lot. He asks Vanraj to forget the matter and speak to Rakhi. He is angered that even Vanraj spoiled the alliance. Vanraj rebukes him for disrespecting them in front of Rakhi.

He feels even Paritosh is like Anupama, who doesn’t know to keep their family pride. He shouts on Paritosh for not caring for the family’s respect. He calls off the alliance. Paritosh threatens to end his ties with Anupama if his relation breaks. Anupama gets into a fix with Vanraj and Paritosh’s blames. She feels sorry for herself.

Paritosh couldn’t say anything to Vanraj, so he vents anger on Anupama. He feels Anupama isn’t a good mother and ruined his future with Kinjal. Anupama feels failed like a wife and mother. Samar cries for his mother. He knows she isn’t at fault and only had good intentions. He doesn’t want the family to blame her like always. He wishes Bapu ji was there to defend her. He fails to support her by answering Vanraj and Paritosh. He knows everyone has taken Anupama from granted.

On the other hand, Nandini praises Vanraj’s true love for Anupama. Kavya feels Vanraj is so busy with his family, that he didn’t even notice her. She feels insecure. She realizes that Vanraj still loves Anupama, that’s why he took a stand for her. Kavya gets upset. She doesn’t learn about Vanraj blaming Anupama. Also, Rakhi doesn’t want Kinjal to think of Paritosh. She wants Kinjal to trust her decision. Kinjal weeps when Rakhi asks her to forget Paritosh. Anupama finds things going awry and decides to meet Kinjal’s family to make an apology. Can Anupama fix up things for Paritosh and Kinjal? Keep reading.

Reviewed Rating for this particular episode Anupama Update Shocking twists 19th August 2020: 4/5
This rating is solely based on the opinion of the writer. You may post your take on the show in the comment section below.