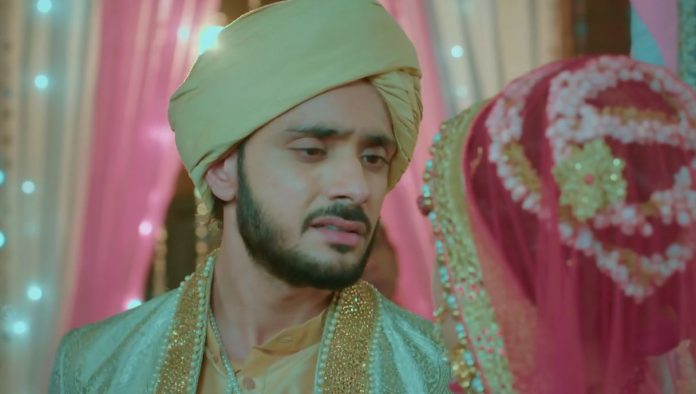 Ishq SubhanAllah Kabir refusal for Zara 24th Aug Update Kabir tells Zara that he just prayed to get her back, he has faith on his love that she will get free from Ustani one day. He asks Zara not to hurt their religion. He wants her to come to him. He refuses to marry Kabir. He tells that he is the chief Qazi, he can’t let her open any music healing centre that’s against the Islamic principles. He tells her that he can’t pay the Mehr she is asking for. He tears the Nikaah papers and breaks her heart.

Irfan and Salma feel bad for Zara. Both Zara and Kabir get shattered with their marriage cancelling. Kabir hurts himself in rage. Ruksar finds Kabir raging. She learns about Kabir’s move to marry Zara. Kabir tells Imran that Zara can’t do a sin, she can’t ask for musical healing as Mehr in the marriage. He wants to stop Zara from entering the hell by her wrong actions. Imran wants to do aid to his hand wound.

Kabir asks him to explain Zara that she will be going away from his life if she gets adamant. He feels he can’t live without Zara. Ruksar questions him to know what did Zara do. Zara feels bad that Kabir didn’t marry her by accepting the Mehr request. Ustani feels bad for her. Zara doesn’t want to fall weak or see Ustani falling weak. Ustani tells that she can’t see her getting away from Kabir. She feels much pain seeing her removing the bridal bangles.

Zara tells her that she will still love Kabir, she can stay away from Kabir and accept it as fate. She tells that if they love someone, then she should accept their thinking. She is sure that Kabir will understand her love and accept her thinking. She trusts Zara and holds hope from Kabir. She asks Zara not to cry. Kabir tells Imran that Ustani can’t snatch his Zara. He gets sorrowful. He tells Imran that his pain can be cured only if he gets successful to get Zara.

Zeenat and Ruksar learn about Kabir’s move to reject Zara. Ruksar tells that they can use Zara’s condition against her. She tells her that she will fill hatred for Zara in Kabir’s heart, he still has to act as her husband till she gives birth to her child. She can’t let him marry Zara. Salma accuses Ustani for breaking Zara’s marriage. She tells that Kabir got insulted and was helpless to leave from the Nikaah. Irfan stops Salma. Salma asks him to rectify his thinking too, Kabir wanted to marry Zara, but Ustani played the big game.

She wants to beg Kabir to marry Zara. Ruksar gets food for Kabir. He refuses to have food prepared by her. Imran asks him not to hurt himself. Ruksar asks him not to refuse the food. He accuses her for the sins she committed. Zeenat asks Ruksar to maintain her cool. Ruksar asks him how would be cook food if he is hurt. Imran tells that he will cook for Kabir. Ruksar tells that he is Zara’s friend also, Zara is also doing the prohibited things, he is wrong to support her.

Kabir tells that Imran is on their side, he will decide for himself. Ruksar asks him to make these little decisions, since he can’t change Zara’s decision. She calls him a weak person since he can just love Zara, but can’t oppose her sternly. She insults him to provoke him against Zara. Kabir gets enraged. Zara stops Salma from ousting Ustani. She tells that Ustani has given her a new purpose of life, else she would have left them forever.

Reviewed Rating for this particular episode Ishq SubhanAllah Kabir refusal for Zara 24th Aug Update: 2/5
This rating is solely based on the opinion of the writer. You may post your take on the show in the comment section below.