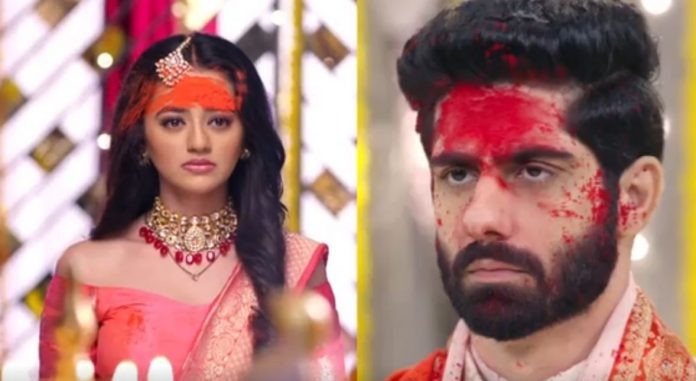 Watch Ishq Mein Marjawa Upcoming twists 24th August Vansh gets an unpleasant surprise in the form of Kabir’s arrival. He first welcomes Kabir to his city. Kabir asks him not to get mistaken that he owns the city. He tells Vansh that very soon Vansh would be behind the bars. He comes prepared with the proof against Vansh to arrest him. He mentions that he has come to investigate a murder case, where Vansh is the prime suspect. Vansh asks him not to blame him if he has no concrete evidence.

Riddhima gets glad to see Kabir and recalls their plan of arresting Vansh for the murder of Ragini’s dad. Kabir asks Vansh about Ragini’s dad. Vansh denies to know him. Kabir asks him to check the evidence himself. He presents the cctv footage. Vansh denies to be the person in the footage, since neither his face or his clothing is seen properly. He doesn’t think its any enough evidence for his arrest.

He asks Kabir to do better homework from next time if he wants to sound serious. Kabir and Vansh get into a verbal bash up. Riddhima’s smile vanishes when Kabir fails to arrest Vansh. Vansh proves Kabir’s evidence wrong. He gets Angre to his support. Angre asks Kabir to meet the office employees who attended the meeting and can give statement in Vansh’s favor. Kabir fails to prove anything against Vansh. Riddhima gets depressed that Vansh is still free.

Kabir acts to interrogate her so that Vansh doesn’t suspect him. Vansh gets protective of her and introduces her as his wife. He doesn’t want Kabir to trouble her. He asks Vansh to leave, since his rules and powers are evident in his house. Kabir promises to arrest him soon and take him to the jail. Vansh doesn’t think Kabir can reach anywhere close to his goals. Kabir warns him ahead of time. Vansh wants to confront Riddhima, who goes to find the phone by which she called Kabir. Mrs. D’Souza tries to get more information from her.

Riddhima doesn’t reveal much to her and gets cautious. Vansh pacifies his Dadi, who takes much tension seeing the police. She reaches the death of Vansh’s dad. She is proud that Vansh has managed the family and business single-handedly, but worries for his life, since the business involves much risk. Vansh keeps a secret about his dad’s death. Dadi realizes that is aware of the murderer and still maintained silence for the sake of family. Vansh changes the topic. He promises to always protect the family.

Vansh then meets Riddhima and confronts her for calling Ragini’s dad. She tells him that she has to take things in her hand and find out the truth herself since he denied from giving information to her. She wants to know his past with Ragini. She accuses him for the murder and gets bitter. He asks her not to give lame excuses every time she is caught spying. He reprimands her for her suspicious behavior.

When she denies her wrong motives, Vansh questions her about calling Kabir. He produces the phone to see her reaction. Riddhima gets tensed on being caught. Vansh gets certain that she has motives behind marrying him, still he lets her go. Vansh and family celebrates Ganesh Chaturthi. Riddhima follows Vansh to his secret room to get evidence against him. She swears to expose his truth and send him to the jail. Does Vansh love Riddhima? Keep reading.

Reviewed Rating for this particular episode Watch Ishq Mein Marjawa Upcoming twists 24th August: 4/5
This rating is solely based on the opinion of the writer. You may post your take on the show in the comment section below.