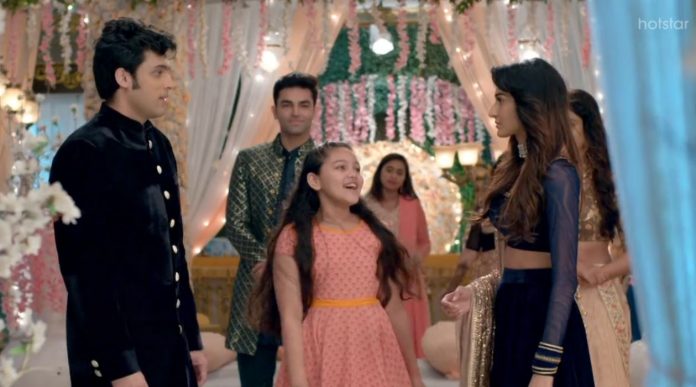 Kasautii Star Plus Sneha identity reveals 25th August On Komolika’s provocation, Anurag blurts out the truth that he is still in love with Prerna and will forever be. He tells her that she can never take Prerna’s place in his heart. He adds that she can’t impose her bad thinking on him. He clears the fact that he hugged Prerna when she spoke of their daughter Sneha, he was missing Sneha, being her dad and was equally upset as Prerna. He tells that none remembers Sneha’s birthday, which he secretly celebrates.

He adds that he cries a lot on that day realizing that he didn’t see her face since eight years. He doesn’t know that Komolika got Sneha killed in the fire incident. Komolika gets worried by seeing his rage. She thinks if he learns the truth about Sneha, then he won’t spare her. He reminds Komolika that he kept his promise and left Prerna for once and all, but he can’t stop loving her.

He asks Komolika to not blame him again, he is keeping his promise and will never get back to Prerna. He threatens Komolika of unseen consequences if she dares to hurt Prerna or crosses limits. He promises to break his silence once she tests the limits of his patience. He tells her that he won’t leave her alive if she dares to hurt his loved ones.

She gets horrified by his threatening. Mohini finds them in the middle of the argument. Anurag doesn’t tell anything to his mum. Mohini realizes that Prerna is the one who is creating problems between Anurag and Komolika. She swears that she will never accept Prerna in their lives.

On the other hand, Prerna misses Sneha and sheds tears. She gets Samidha’s call at the same time. She forgets her sorrow while talking to Samidha. Samidha thanks her for the donation to ashram. She promises to meet her the next day. Prerna feels a strange bond with Samidha. Mr. Bajaj finds Prerna asleep and feels love for her. He loves her a lot and can’t see her hurt. He wishes he could take away all her pain and suffering. He just wants to see her happy. Anurag is also recollecting Prerna and feels hurt. Anurag wishes that Prerna stays happy.

He would have asked her about Sneha. He tries to figure out why was Prerna shattered, like something bad happened with Sneha. He gets restless and decides to find out Sneha. Komolika stays scared of his anger and wishes he doesn’t erupt his rage on her. She stays away from him. She wants to ruin Prerna’s life by targeting Samidha, knowing that Prerna has got close to Samidha. She wants Prerna to pay a big price. Next day, Anurag and Prerna visit the temple, where Samidha has called Prerna. Anurag happens to come there by coincidence.

He meets Samidha and feels the same bond of parent and child. He wonders how do they connect. Samidha gets hurt and gets cared by Anurag. Anurag feels hurt on seeing her injury. He looks after her like a father. Meanwhile, Kuki informs Prerna that she is at her friend’s place, she can’t face Mr. Bajaj once he knows about her rustication.

Prerna assures that she will get Kuki join the college again. Kuki feels sorry that her bond with her father is not the same as her childhood. She regrets that he has distant her from his heart. She wants him to forgive her for her mistake. Anurag and Prerna will soon know the truth that Samidha is their daughter Sneha.

Reviewed Rating for this particular episode Kasautii Star Plus Sneha identity reveals 25th August: 4/5
This rating is solely based on the opinion of the writer. You may post your take on the show in the comment section below.