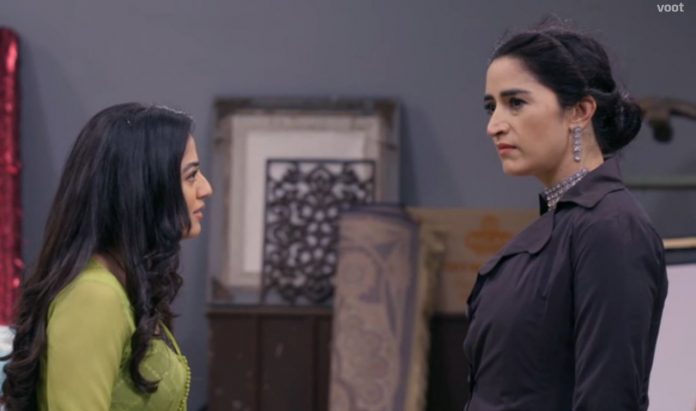 Ishq Mein Marjawa Quick Review Riddhima catches Anupriya Riddhima gets blamed for stealing the painting. She doesn’t want to accept the blame when she isn’t at fault. She tells Vansh that she doesn’t want to hurt him, he is a son and he has rights on his mum’s memories. She tells that she can never separate him from Uma’s memories. He accuses her for stealing Uma’s last memory, which means a world to her. Riddhima promises to find the painting for his sake. Vansh orders her to find the painting or leave his house.

He gives her an hour to complete the goal. Riddhima works hard to find the painting. She gets troubled by someone spying on her all the time. She wants to get a lead to reach the painting. The family prays for Vansh’s peace of mind, knowing he is not settled emotionally. Vansh is quite disturbed after losing Uma’s painting. Riddhima follows the unknown enemy, but falls into the enemy’s plan. She spots some kerosene oil fallen on the floor.

She enters the room where the hidden enemy plots a conspiracy to burn the painting. Riddhima becomes a prey. She becomes the reason for the painting burning up. Vansh and the family reach the place on hearing her loud scream. Vansh misunderstands her, on seeing her holding the kerosene can. He thinks she has burnt the painting, knowing how important it is for him. Vansh tries hard to save the painting and gets his hands burnt. Vansh’s pain gets seen by his entire family, who cry along with him.

Riddhima feels bad for Vansh for the first time. He beats up Angre in anger when the latter stops him from burning his hands. Vansh vents anger over her. He scolds Riddhima badly, but stops his inner devil from hurting her. He recalls the times they met, when he fell for her, when he married her and promised to be her protector. Vansh leaves her free, but decides to end their relation. He lets her go alive.

He orders Angre to leave Riddhima outside the house. Riddhima gets blamed again for burning the painting, when she is innocent. She doesn’t want to compromise with her self esteem. She tells that she will find the enemy, who is creating a rift between them. Riddhima tells Vansh about the unknown enemy, whom she has seen burning the painting. Vansh doesn’t believe her stories. He just wants her to get out of his sight. He tells Riddhima that none of her lies would work now, he isn’t interested in knowing about the enemy.

Riddhima doesn’t want to leave. She attacks Angre in a bid to stay back in the house and find the real culprit. Vansh finds Angre attacked by Riddhima. He loses his cool and orders Angre to find her at any cost. He decides to punish Riddhima this time. Angre suspects Ishani on seeing her tensed. He searches for Riddhima in the house. Riddhima makes a plan to catch the unknown enemy. She lays a trap and finds the masked person. On confronting the enemy, she receives a shocker. She learns that Anupriya is the unknown enemy, who had burnt Uma’s painting and put Vansh in inconsolable sorrow.

She asks Anupriya if she is taking revenge by hurting Vansh emotional since she is his stepmom. Anupriya tells Riddhima that she loves Vansh a lot and wanted to free him from the past bounds, which just give him pain. She reveals the reason behind her move, since she had taken it just to free Vansh from the sorrowful baggage. She wanted his betterment. She wants Vansh to move on in his life. Anupriya justifies her actions. She hopes Riddhima doesn’t reveal her name to Vansh. Riddhima wants a clean chit for herself than doing a favor on Anupriya.

She decides to expose Anupriya to take her place back in the house. Riddhima gets accepted in the house after clearing the blame off her name. She performs the Ganpati puja with Vansh. Another conspiracy brews up in meantime. Riddhima gets close to face death when someone replaces a coconut with explosives in the puja. Riddhima plays smart this time to expose Anupriya, but will she succeed to find Vansh’s real enemy hiding in the family. Who will plot to kill her? Will Riddhima die or Vansh save her life in time? Keep reading.

Reviewed Rating for this particular episode Ishq Mein Marjawa Quick Review Riddhima nabs Anupriya: 5/5
This rating is solely based on the opinion of the writer. You may post your take on the show in the comment section below.