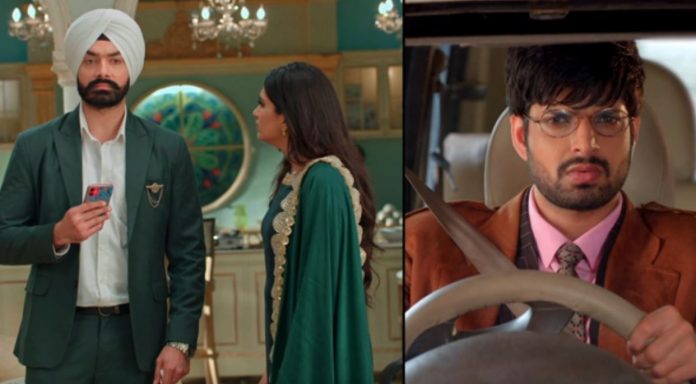 Choti Sardarni 31st August Preview Sly Vikram exposed Meher and Sarabjeet realize that Sarabjeet’s bank account has been hacked. They check the bank locker details online and get the camera feeds. They learn that Vikram has hacked the account. Sarabjeet recalls Vikram’s warning. Meher learns that Sarabjeet has kept his confidential details in the bank account. She asks him how did Vikram get his bank card. She questions him about the locker contents. Sarabjeet gets speechless. He tries to stop Vikram from accessing the locker. Vikram thinks Sarabjeet’s secret is out now.

The guards catch him and hold him at gun point. Vikram asks them not to shoot and informs about about on going CBI investigation against Sarabjeet. He reveals his real identity and also gives his ID card. The guards release him on knowing about the CBI investigation. Sarabjeet and Meher watch the live feeds. Harleen wants to find her sister. She tells Robby that Sarabjeet is too busy in his work, so she needs to find her sister. She doesn’t know Aditi is the sister she is looking for. Aditi leaves a letter for Meher and Sarabjeet. She hands over the letter to Param before making a leave.

Vikram tells that nothing can be obtained on requesting. He calls Sarabjeet a wrong person. Sarabjeet tells him that none can prove him wrong, his character and business are all clean. She asks Vikram to go ahead and check the locker. He isn’t scared of anything. He believes in his truth. He approves the access and asks Vikram to check his life’s most precious thing present in the locker. He permits Vikram to investigate as much as he wants, until he gets satisfied. Vikram finds Meher’s bangles.

Meher gets surprised to know that Sarabjeet had kept her bangles in the safe, regarding it too special for him. Sarabjeet tells Meher that nothing is precious to him than her. Vikram drops the bangles by mistake. Sarabjeet feels upset. Meher and Sarabjeet get emotional. Vikram picks the bangles and keeps it back. He apologizes to Sarabjeet. He fails to find any evidence against Sarabjeet in the scam case. Meher asks Sarabjeet the reason for keeping her bangles so safe. He asks her not to worry, everything got fine, Vikram’s investigations will get shut.

He tells Meher that he had kept her bangles as her last sign, since they had decided to part ways. He exclaims that that day was very tough, he was dying in every moment, he felt he can’t live without her. Meher expresses her feelings. She tells him that she felt terrible when he removed her bridal bangles from her hands. He tells that he wanted to stop her, but he had to keep his promise. She asks him why didn’t he break his promise.

He tells that he would have broken it if she hinted her wish. She doesn’t want him to wait for her confession every time. He tells that he can’t understand everything on his own. She sheds tears that her bangles fell down. Sarabjeet tells her that Vikram can’t shatter their relation. He tells that they will always be together. Meher doesn’t like Vikram’s means of investigation. She feels Vikram has taken advantage of his goodness. She suspects Aditi to be involved with Vikram. She tells that Aditi had passed the OTP to Vikram.

She wants to confront Aditi for her backstabbing. They find Aditi’s letter with Param Aditi feels sorry that she lost Meher and Sarabjeet’s trust. She wishes that Vikram finds some proof against Sarabjeet. Vikram calls Aditi and tells her that the locker just had Meher’s bangles. He informs that their plan failed badly, Sarabjeet would be knowing about their plan by now. He asks her not to worry for her reputation, since she has saved Meher and Karan’s lives. He tells that Sarabjeet is innocent. He knows that case has nothing more left in it, but the story is still due.

Sarabjeet and Meher get Aditi’s sorry note. He wants to forgive Aditi, knowing that Vikram compelled Aditi to do wrong. Meher tells that Aditi and Vikram planned it well, they planned the dinner and also the play rehearsals. She feels bad that Aditi cheated them, the reason doesn’t matter. Sarabjeet counts Aditi’s favors. He defends her as he regards her as his sister. Meher tells that even if Aditi is helpless, Vikram and Aditi can’t be forgiven to steal their bank details. Sarabjeet tells that Vikram’s way was wrong, but he was just doing his duty.

Meher tells that they will file a police complaint. Sarabjeet stops her from doing it. He tells that they have to explain Vikram in his own way. Vikram calls Sarabjeet to question him about a new case. He asks Sarabjeet about his orders to find a missing guy Manav. Sarabjeet tells him that he knows Manav, who was his friend and disappeared suddenly. Meher gets shocked to know that Sarabjeet and Manav were friends.

Reviewed Rating for this particular episode Choti Sardarni 31st August Preview Sly Vikram exposed: 5/5
This rating is solely based on the opinion of the writer. You may post your take on the show in the comment section below.