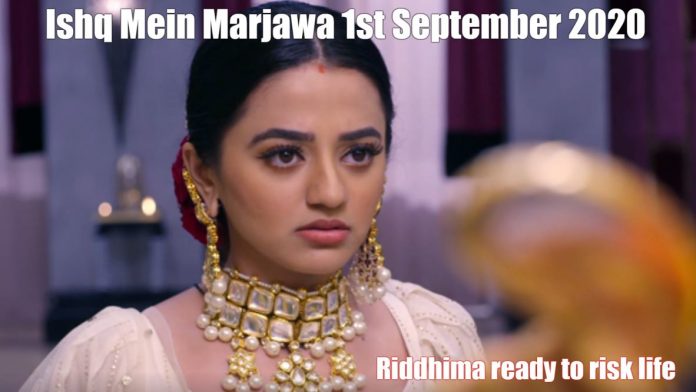 Riddhima threatens to tell the truth to entire family. She wants to clear her name. She then changes her mind surprisingly. She takes the blame on herself. Vansh finds Riddhima admitting her crime of burning Uma’s painting. Riddhima makes a heartfelt apology. She tells Vansh that she is ready to leave from his life. She doesn’t want Vansh and Anupriya’s equations to get worse.

She feels bad that Vansh lost his real mum, and it could be worse if he loses faith on Anupriya. Dadi asks Vansh to forgive Riddhima and let her stay in the house at least for Ganpati’s sake. She wants Riddhima to be a part of Ganpati Visarjan. Vansh accepts Dadi’s request. He tells Riddhima that she can stay in the house, but she shouldn’t show up her face to him to provoke his anger. He doesn’t promise to control his rage. Dadi tries to put sensibility in him.

She asks him to have a big heart and remember his relationship with Riddhima. Vansh declares that he will never forgive Riddhima for her mistake. He wants to keep her home and punish her. Anupriya isn’t grateful to Riddhima for hiding the truth. Instead, she insults Riddhima for being a middle-class girl and not keeping any relation well, not even their relation of enmity. She finds Riddhima doing a drama to win her praise. She doesn’t want to trust Riddhima after one favor from the latter. She decides to trap Riddhima and get her ousted from the house soon. Riddhima gets heartbroken when she fails to win Anupriya’s heart.

Aryan confronts Riddhima over her move to accept the blame. Riddhima doesn’t reveal the truth to him. Their bitter argument results badly. She challenges him in anger. Aryan doesn’t want to forget the slap. He accepts her enmity. He doesn’t want her to stay in the house in peace. Aryan becomes her enemy.

Meanwhile, Riddhima finds Vansh burning Kabir and her special memories alongwith her some pictures. She cries and screams to save the memories. Vansh doesn’t let her save the memories. He asks her to see the ashes and remember the pain she had given him by burning Uma’s painting. Vansh wants to teach her a lesson of lifetime. He also gets against Riddhima. Riddhima is left broken and shattered after losing Kabir’s love sign.

She didn’t wish to lose Kabir and her engagement ring. Moreover, Riddhima becomes Ishani’s target as well. Ishani insults Riddhima. She feels Riddhima is a greedy thief, trying to rob their jewellery. She ends up hurting Riddhima in anger. Dadi and Siya defend Riddhima and take her for the Ganpati puja. Riddhima knows that there are many people in the house who hate her and want to oust her. She is ready to face them and also the death if it comes. She proceeds in her mission to find evidences against Vansh. Riddhima becomes subjected to a new evil, when someone plots to kill her during the puja by keeping an explosive coconut.

Reviewed Rating for this particular episode Ishq Mein Marjawa News Vansh settles scores his way: 4/5
This rating is solely based on the opinion of the writer. You may post your take on the show in the comment section below.