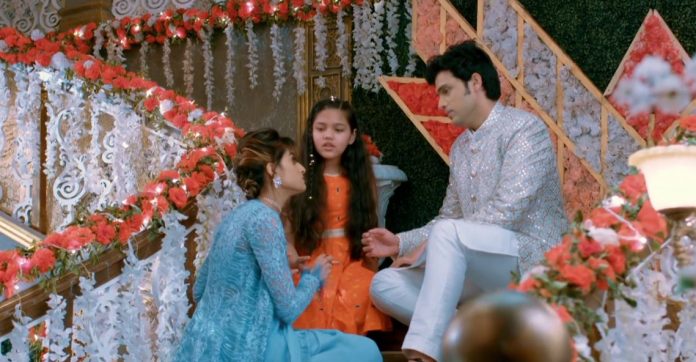 Kasautii Upcoming Twist AnuPre Past comes knocking Anurag feels Samidha is Sneha when he learns that she was also wrapped in the a red chunri at the time when someone abandoned her at the orphanage. Anurag realizes that he left his little baby with Durga Maa’s blessings for her safety when he handed her over to Chandrika on Komolika’s insistence. Komolika fake promised him that Sneha would be reaching Prerna via Chandrika’s orphanage.

Komolika assured him that both Prerna and Sneha can live their lives in peace once he sends them away. Anurag just wanted them safe. Little did he know that Komolika would backstab his trust like always and leave his daughter to die at the orphanage. Nevertheless, Samidha got saved at the time when the orphanage got completely burnt. She was shifted to another orphanage, led by Chandrika’s sister Priyanka. Anurag enquires about Samidha’s orphanage. He learns that she is from a different orphanage.

He thinks he should limit his overthinking and not connect the dots. He doesn’t want to assume Samidha as Sneha, knowing the fact that Chandrika gave Sneha to Prerna and Sneha is now in London. He limits his heart from following Samidha emotionally. He takes care of Samidha, feeling her like his daughter Diya.

On the other hand, Komolika gets angered on seeing Anurag and Samidha bonding. She thinks Samidha has become a weakness for both Anurag and Prerna. Komolika wants to plot a big drama to dupe dowry from Veena on the name of rituals. She waits for the right moment. Mohini insults Veena like she used to do before when Veena was her employee’s wife. Shivani and Prerna feel bad. Veena herself gives an answer to limit Mohini’s taunts. Veena reminds that times have changed and nothing is as same as before, her status has changed as well and she isn’t bounded to work for anyone.

She reminds Mohini how Komolika treats her like a servant at home. Mohini gets speechless and thinks its better to not drag the argument further. The family gets praising Samidha for her talents in decorations. Prerna likes Samidha a lot. She wishes Samidha was her Sneha. Veena understands Prerna’s emotions. Prerna learns that Samidha got hurt. She rushes to see her and misunderstands the situation on seeing Anurag. She blames Anurag for hurting the girl just to take revenge on her.

She doesn’t confront him about the demolition of the orphanage, which could have exposed Komolika’s plan in front of him. She could have got help from him after the confrontation, but she keeps the matter to herself.

She gets into a kiddish fight with Anurag. Samidha gets enough of their fights. She wants them to just be friends for her sake. Samidha makes them friends. They get quiet for her sake. Komolika doesn’t want Samidha to become a strong link to bridge Anurag and Prerna. She thinks to tackle Samidha.

Furthermore, Kaushik’s liking for Kuki increases. Moloy wants him to fool Ronit and his phone so that they can spy on Ronit’s secrets. Moloy wants to stop Shivani’s marriage if Ronit is a wrong person. Kaushik engages Ronit in his talks, but fails to get his phone. Ronit stays alert and ahead of their plans. Prerna and Anurag have a moment of emotional burst out. He confronts her feelings and they both slip into their past time.

Reviewed Rating for this particular episode Kasautii Upcoming Twist AnuPre Past comes knocking: 2/5
This rating is solely based on the opinion of the writer. You may post your take on the show in the comment section below.