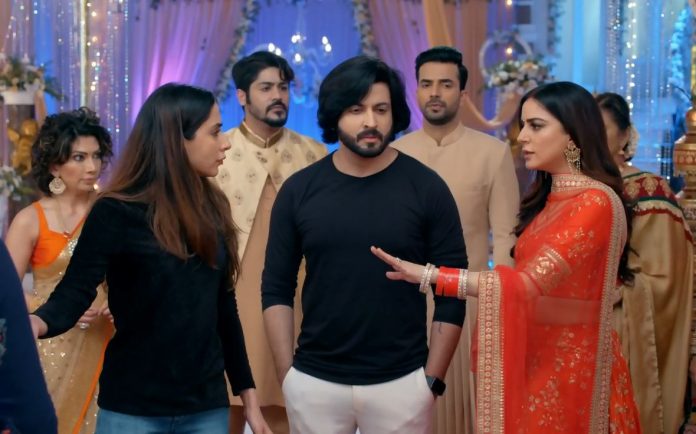 Kundali Bhagya Preeta unusual tag for Mahira 3rd Sept Preeta gets the NGO ladies who fight for the rights of women. She tells them that Mahira and Ramona are the guests in Luthra family. She introduces Luthra family. She tells Rakhi loves her a lot, she is like her mum. She takes Rakhi’s blessings. Rishabh gets glad. Rakhi greets the ladies. She tells Preeta that she isn’t her mum-in-law. She tells that Kareena is bitter-tongued but good at heart. She introduces Kareena and also Bani.

She tells that she met Luthras because of Bani. She makes everyone speechless by getting the NGO ladies. She praises Rishabh who runs the house well. He tells that Rishabh is her best friend, her brother-in-law, who always supports her. She also gets support from Sameer and Kritika. She introduces Sherlyn. After the family, she tells about Karan, who is destined to be her life partner. She tells that she has finally come to her house.

She expects them to accept her. She shows her strength. Meanwhile, Prithvi asks Sarla how can Karan and Luthras accept Preeta. He tells that its wrong that Preeta goes there to get humiliation. He tells that he loves Preeta and respects her, she should leave Karan and come to him. He promises to keep her happy. He tells that he will never come back if she doesn’t understand his concern.

He asks Sarla to explain Preeta to grab the offer, else he will never marry her. Sarla slaps him again. He stops her from slapping him like before. Karan asks the NGO ladies not to get into Preeta’s words, she isn’t his wife, she isn’t Luthras’ Bahu. He asks Preeta to get out. Karan denies their marriage. Preeta warns Mahira against claiming any rights on Karan. Mahira tells that they will not accept her if she gets the NGO ladies. Preeta warns her to stand in some corner. Karan defends Mahira. Preeta makes him admit that he had married her.

The NGO ladies ask him to accept Preeta in his house. Karan doesn’t listen to them and asks Preeta to get out of his house. He argues with the NGO ladies. Prithvi misbehaves with Janki and Sarla. Shrishti finds him in her house. She threatens him to make him away. She can’t let him speak nonsense and hurt Sarla. She fights with Prithvi. She tells him that Preeta has gone to meet Karan, whom she married twice. Preeta gets insulted by Karan. The NGO ladies support Preeta. She complains about Karan’s misbehavior. The NGO ladies ask Bani to give a place to Preeta in the family.

Reviewed Rating for this particular episode Kundali Bhagya Preeta unusual tag for Mahira 3rd Sept: 4/5
This rating is solely based on the opinion of the writer. You may post your take on the show in the comment section below.