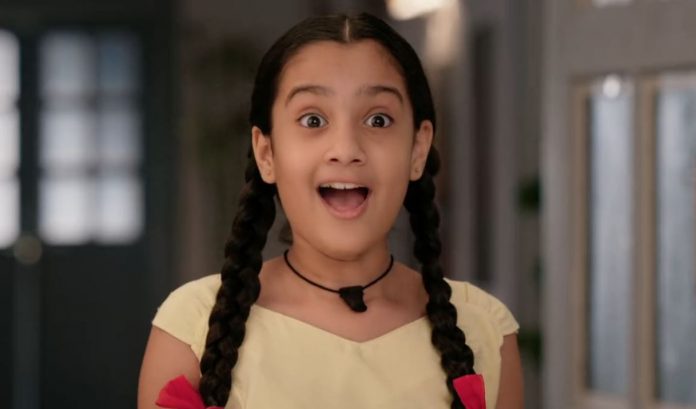 YRKKH Chori adoption twist Kartik Naira 10th September 2020 Kartik and Naira get remorseful thinking of their fate which snatched their daughter Kaira from them. Naira tells him that she sees Kaira in Chori, since Chori is also of the same age. She feels Chori loves her a lot, there is a strong bond between them, since the very first meet. She tells him that she is also fond of Chori.

Kartik tells her that its unfair with them that they got many hopes and then lost Kaira. He doesn’t want Naira to torture herself again by getting any false hopes. He tells that Chori can never be Kaira. He doesn’t want to think in that direction when they will just get disappointment. She tells him that Chori has risked her life to get Kaira’s medical file, which is a really big thing. He adds that Chori loves Naira selflessly.

He knows that Chori is wishing to stay with them, but he can’t keep her forever. She also feels upset to send Chori with Sudha. She has developed a unique bond with Chori in just a few days. He asks her not to feel much attached, else she will hurt her own feelings. On the contrary, Kirti tries to find Krish’s picture. Naksh asks her what is she looking for. When she lies to him, he understands that she is hiding something from him.

Aditya makes an entry in the Singhania house to reveal her secret. He tells Naksh that Kirti is indeed hiding something from him and he should ask Kirti about it. Kirti gets tensed when Naksh starts yelling at Aditya. She fears that the secret hidden since years will come out. She starts panicking and realizes she is daydreaming. Naksh finds her too tensed and takes care of her.

Kirti expresses her love for Naksh and hugs him. Kirti doesn’t want her scary dream to turn true. He thinks she is just stressed about Manish. Kartik finds Naira emotional. He cheers her up by singing for her. They spend a romantic time and try to forget their sorrow. Chori does the aid to her wounds. She is much hurt. She doesn’t take the medicines so that she falls ill and doesn’t need to go with Sudha.

She sleeps bearing the pain. Kartik plans a surprise for Chori. He gets farewell gifts for her. He tells the family that he wants to gift toys to Chori. Naira finds an ailing Chori and worries for her. She informs the family about Chori’s condition. She blames herself. She feels she failed to look after Chori when the girl has risked her life and suffered burns. Chori doesn’t want to go with Sudha. Naira realizes her wish. Kartik feels sorry for Chori. Naira thinks Kartik will never listen to Chori’s wish.

Chori’s family drawing makes them too emotional. They know that Chori wants to live with them as family. Naksh gets Aditya and Krish’s picture. He turns angry when he sights Aditya with Kirti in the lawn. He wants to know why are they meeting and why did Aditya reach Krish. He wants to keep Aditya away from Krish. Kirti doesn’t know that Naksh has seen them together. Naira tells Kartik that Chori won’t be happy without them. Kartik decides to adopt Chori. He tells Naira that they will not send Chori with Sudha. He tells that they can keep Chori as family, since she is a nice girl who deserves a good life.

He adds that Chori should get a family like theirs. He wants to regard her family. Naira gets very much pleased with his decision. Dadi returns home and meets the family. She learns Kartik’s decision to adopt Chori. Kartik tells her that he wants to adopt Chori and make her part of the family. Dadi doesn’t give her opinion. She isn’t pleased to know his decision. Naira feels Dadi is against their decision. She wants to convince Dadi first and then finalize the adoption. Chori gets happy to know that Kartik and Naira are adopting her. She is shocked when a family arrives to take her. She doesn’t want to go with them. Kartik and Naira fear of losing her.

Reviewed Rating for this particular episode YRKKH Chori adoption twist Kartik Naira 10th September: 5/5 Interesting
This rating is solely based on the opinion of the writer. You may post your take on the show in the comment section below.