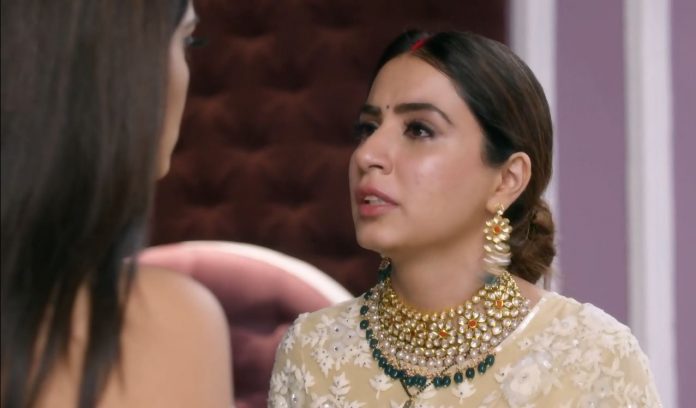 Kundali Bhagya 7th October 2020 Written update today Pawan is glad to see Prithvi dressed up as the groom. He wants the pandit to get Prithvi and Preeta married soon. Janki gets conscious. She sees Prithvi and wonders why is he unconscious. She doesn’t want Prithvi to be behind the master plan. She is angry seeing cheap Prithvi. She wants to bash him up. She wants to throw out Prithvi from their lives.

She realizes that Prithvi got Preeta kidnapped for the marriage. She angrily curses Prithvi. She wishes to find Preeta. She thinks if Shrishti has come to rescue Preeta. She prays for Preeta’s welfare. Janki sheds tears in tension. Karan looks for Preeta. He doesn’t get into Mahira’s words. Karan wonders where did Preeta go by leaving the house without informing him. He thinks Mahira is behind Preeta’s disappearance.

Mahira produces a fake letter from Preeta’s side. She tells Karan that Preeta has gone to live her life with Prithvi. She asks Karan if he is disgusted with her that he wants her to leave. She tells that he shouldn’t find Preeta who broke her relation. She tells that Preeta abandoned him, she doesn’t care for Luthra family respect. Karan doesn’t believe her. Mahira fills his ears against Preeta. Karan defends Preeta and further shouts on Mahira.

Sherlyn overhears their conversation. She is also angry on Mahira for sending Preeta to Prithvi. Mahira tells Karan that she will tell him what happened exactly. She lies that Preeta was leaving. She tells that she had worn Preeta’s clothes just to cover up her disappearance so that she can save his family respect in front of the guests. She wants to save him from embarrassment. Karan tells that he will handle everything and save his family reputation. He doesn’t want her to decide everything on his family’s behalf.

Mahira continues to mislead him. Pawan tells Preeta that he will free her once she marries Prithvi. Preeta tells that Mahira is lying to make them enemies. She tells him that Prithvi will never force her for marriage. Pawan threatens the pandit to get the marriage done quickly. Preeta feels helpless. Mahira tells Karan that Preeta has clearly written that she will run away with Prithvi, who is her true love.

She asks Karan to accept her and take her downstairs to introduce her as his wife. She wants Karan to believe her. She promises him that she will always love him and become an ideal wife. Karan knows her madness. He asks her to stop it. He doesn’t care if Preeta leaves him. He doesn’t like Preeta, who forced him to accept her as wife. He doesn’t want Mahira to force him. He doesn’t want Preeta and Mahira as well. He reveals that he never wanted to marry her, he doesn’t love her and that’s the truth. He leaves Mahira.

Mahira asks Sherlyn to support her. Sherlyn shouts on her. Mahira breaks down with Karan’s rejection. Sherlyn tells Mahira that if Preeta comes back to Karan, they should be prepared to lie about Preeta and Prithvi’s marriage. She wants Mahira to keep the lie. Karan wonders if Preeta really left. Preeta wishes Karan knows about her situation. Sherlyn pacifies Mahira.

She asks Mahira why didn’t she tell her plans to take her help. She hates Preeta a lot. She knows Mahira is acting innocent and playing a mind game. Mahira accepts that they both need each other. Sherlyn doesn’t want to kill Mahesh right now. Mahira tells that her marriage will stop for a year if Mahesh dies at this time. She asks Sherlyn to spare Mahesh as of now.

Reviewed Rating for this particular episode Kundali Bhagya 7th October 2020 Written update today: 3/5
This rating is solely based on the opinion of the writer. You may post your take on the show in the comment section below.