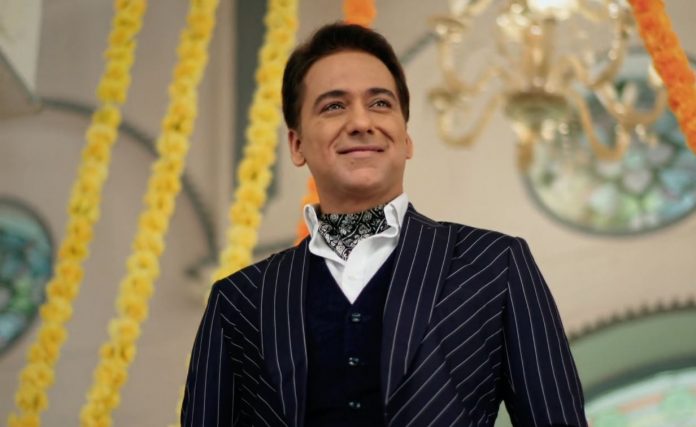 Yeh Rishta Kya Kehlata 9th October 2020 Written Update Manish’s surprising recovery The pandit guides Kartik and Naira for the Nahavan ritual. Kartik gifts the children in the family. He wants to gift something good to Krishna as well, which Dadi dislikes. The baby cries a lot. Kartik wants to pacify the baby. Pandit wants Kartik and Naira to stay back for the puja. Akhilesh tells them that he has raised his kids as well, he can take care of the baby too.

Kartik knows it since Akhilesh has raised him too, when he used to stay away from Manish and Suwarna. Kartik trusts Akhilesh a lot and gives the baby to him. Akhilesh takes the baby to Kartik’s room as per Kartik’s instructions to put the baby in cot. Akhilesh gets an important phone call. Meanwhile, Krishna finds a way to console restless Manish. She wears Kartik’s shirt and puts up a drama to entertain him.

Manish agrees to play with her when she becomes Kittu for him. Krishna sees the baby and goes to play with her. Manish wants Krishna to play with him. He dislikes the fact that the baby came in between to spoil their game. He reacts violent and takes the baby from the cot in Akhilesh’s absence. Akhilesh and Krishna get worried to see Manish with the baby. The pandit guides Naira about the completion of the puja.

He makes Krish perform the last ritual. The entire family reach the baby to complete the ritual. They see Manish running away with the baby. They fear that a disaster will occur. Manish doesn’t intend to hurt the baby, but he stumbles. He loses control on himself and drops the baby in the water by mistake. Kartik and Naira manage to save the baby. Kartik doesn’t let Manish fall down over his head and get hit. He doesn’t want another head injury for Manish. Manish turns unconscious. He takes Kartik’s name when he gets senses back.

Kartik is surprised to hear his name from Manish. He calls a doctor to examine Manish. Doctor tells them that Manish has no injury, he will gain consciousness in some time and get stable. Kartik is worried, as the family is. Dadi wants to know how did Manish take the baby. Krishna accepts her mistake. She tells that she is responsible for Manish’s state, she failed to keep him busy in the play. Dadi rebukes Krishna further.

She commands Krishna to get away from her sight. Krishna apologizes to everyone. She feels sad. Kartik and Naira defend Krishna. They don’t think its Krishna’s mistake. They tell Dadi that Krishna can never hurt family, its just an accident. Akhilesh too takes the blame on himself. Krishna feels she is really guilty that she causes problems for the family always. Kartik asks her not to regard herself as unlucky. He just wants Krishna to take care of herself. Krishna tells him that she will pray for Manish.

Kartik and Naira embrace Krishna. While the family prays for Manish, they realize that Manish got conscious. Manish unexpectedly recovers. He regains his memory. The upsetting shock turns into a beautiful surprise for the family. Manish asks Naira about the baby. Naira tells that the baby is Kartik and her daughter. Manish realizes much time has passed. He gets tensed. Doctor tells them that Manish shouldn’t get any shocking news that can change her mental state again. He warns the family against giving any unusual news to Manish.

Manish turns stable and understands that nearly a year passed in his illness. Kartik tells him that the entire family missed him a lot, but Suwarna is the one who missed him the most. Manish feels sorry to trouble them. He wants to relive the happy moments with them. Manish gets back to his old rocking avatar and surprises the family. They get too joyed to see Manish back in his powerful Manish Goenka avatar.

Reviewed Rating for this particular episode Yeh Rishta Kya Kehlata 9th October 2020 Written Update Manish’s surprising recovery: 4/5
This rating is solely based on the opinion of the writer. You may post your take on the show in the comment section below.