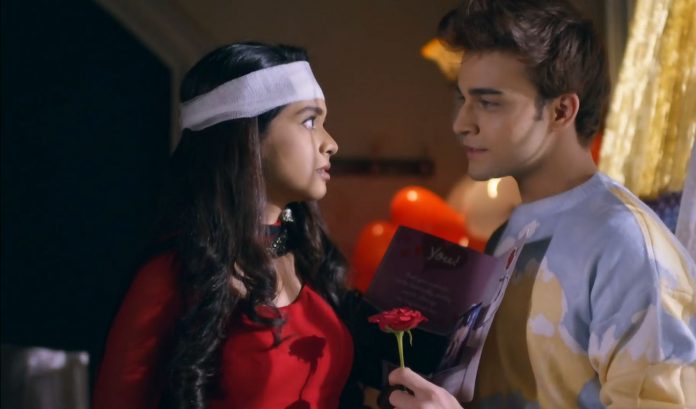 Kumkum Bhagya 13th October 2020 Written Update Review Abhi tells Raj about Dadi’s ultimate care. Raj wants Abhi to get fine soon. Raj realizes that Abhi is living away from Pragya. He wishes to forget the fact that he lost his daughter just because of Pragya. Abhi gets his phone to make a call to Prachi. He wants to know her well being. She is afraid that Abhi will scold her about Pragya reprimanding Rhea for her misdeeds. She gets cautious and answers the call. She is surprised to hear his caring words.

He tells her that he is bit hurt, that’s why he couldn’t come to meet her. He wants her to take care and meet soon. Prachi thinks Rhea didn’t tell anything about Pragya to him. Ranbir and Prachi miss each other a lot. They wish they could meet. Pragya wants Prachi to stay safe. She doesn’t want anyone to hurt her. She feels bad for Rhea. She thinks Rhea always longed for mother’s love and became evil. She wishes she met Rhea before and raised her like Pragya.

Rhea is in pain that Ranbir hates her. Aaliya wants to win back her sympathy by being her friend. She wants Rhea to learn from her pain. Rhea can’t tolerate Ranbir’s pain. Rhea loves Ranbir a lot. She doesn’t care that he scolded her. Ranbir wants to make the day special for Prachi. He thinks he missed the rose day, but still he can confess his feelings to her. He doesn’t want to make the confession on the phone. He thinks of the best way to propose Prachi. He calls up Shahana to make a plan to surprise Prachi.

Sarita grows curious to know if Shahana also have an affair with someone. She thinks there is someone in her life. Shahana is ready to help Ranbir. Ranbir tells his plan. Shahana jumps with excitement. She loves him for the great idea. Ranbir asks Shahana not to tell anything to Sarita, else the surprise will get spoiled. Shahana agrees to keep it a secret. Sarita tells that she has heard the conversation. She asks Shahana about the affair. Shahana lies to her. Sarita wants to find out the truth. Pragya feels bad for Rhea.

Prachi hugs Pragya. She assists Pragya in work. Rhea decides to meet Pragya and tell her the truth of their relationship. She knows Pragya misses her other daughter and loves her. She also loves her. Rhea calls Pragya, but the latter doesn’t answer. Rhea knows that Pragya’s anger will melt when their relation’s truth gets known. She messages Pragya to meet her once. Pragya is sorrowful. She thinks to give her a chance to Rhea for the final time. Aaliya comes to apologize to Rhea. She receives Pragya’s message on Rhea’s phone.

She is glad that Pragya doesn’t know Rhea’s truth by now. She wants to stop them from meeting. Ranbir plans a beautiful surprise for Prachi. He finally confesses his love for Prachi. She gets overjoyed. Later, Rhea reprimands Aaliya for stopping her from meeting Pragya. She rages Aaliya by questioning her place. What will Aaliya do to stop Rhea? Keep reading.

Reviewed Rating for this particular episode Kumkum Bhagya 13th October 2020 Written Update Ranbir proposes Prachi: 4/5
This rating is solely based on the opinion of the writer. You may post your take on the show in the comment section below.