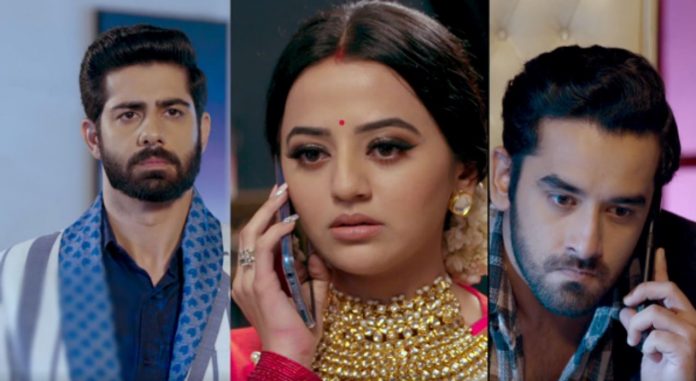 Ishq Mein Marjawan 18th October 2020 Written Update Ragini’s murder truth Vansh feels Riddhima isn’t trustworthy. He holds many complains in his heart, while he looks forward to meet Riddhima at the aarti. Vansh tells Siya that Riddhima is still finding Ragini’s truth when he opposed her. He doesn’t want Riddhima to hunt for Ragini’s truth. Siya tells that maybe Riddhima is insecure as his wife, since she loves him. Vansh tells that love brings faith in a person. Riddhima doesn’t want any cheat to end their relation. She wants to change everything so that they can make a fresh start.

She prays for telling the entire truth to Vansh. She decides to tell her secrets to Vansh herself. Dadi advises her not to cry and better understand Vansh. She wants Riddhima to be careful, since Vansh loves his family a lot. She tells that she should be with Vansh as his strong protector. Riddhima is thankful to Dadi for the right advice. Dadi wants her dilemmas to end. She suggests that Riddhima keeps the Navratri fasts for Vansh so that their marriage gets into a strong bond. Riddhima gets to speak to Kabir, who complains about Vansh.

Kabir instigates her against Vansh. He asks her to help him find evidences against Vansh. He threatens of ending his life if he gets suspended from the job. Riddhima feels sorry for him. She refuses to him. She believes Vansh is innocent. Kabir tells that Vansh is a deadly criminal who shouldn’t be defended.

She tells him that she trusts Vansh, she knows Vansh cares for her life. She sounds sure that Vansh will never kill anyone. She doesn’t want any proof from Kabir’s side. He asks her to bring proof for Vansh’s innocence if she is so sure that Vansh didn’t kill Ragini. Riddhima tells him that she will find the evidence in favor of Vansh just to end his suspicion. Vansh hopes that she doesn’t search for any evidences again, and shows some faith on him. He is tired of her spying habit. Riddhima looks for the evidence to prove her husband right.

She finally gets a video footage holding solid evidence of Ragini’s murder. She finds Ragini pleading to someone for her life. Riddhima knows Vansh isn’t the murderer. She wants to know who is the man in the video. She gains crucial information from the video. Vansh finds her spying once again and gets heartbroken that she is still into her disbelief.

Riddhima explains Kabir that she trusts Vansh and she is very much sure that Vansh can’t be a murderer. She wants him to know her opinion and respect it, since she has entered Vansh’s life on his saying. She further adds that she knows Vansh has a clean heart, who loves his family a lot. She knows the way Vansh cared for her life. She tells that she will be getting justice for Ragini, but Kabir shouldn’t just blame Vansh.

She wants to prove Vansh’s innocence in the case. She also clears that she will move on in her life once she gets justice for Vansh. She doesn’t want anything to affect Vansh and her marriage. Kabir is shocked that she has cleared her decision to him. He wants to stop her. She asks him not to blame Vansh without any proof. She decides to end her ties with Kabir once Vansh gets a clean chit. Kabir fails to explain her.

Anupriya overhears Kabir and Riddhima’s conversation. She alerts Kabir that Riddhima is falling in love with Vansh and will not believe them easily. She tells that Riddhima will not be of any help to them from now, she may fail their plans for the worse. She wants Kabir to make some plan. On the other side, the family is seen doing the first aarti of the Navratri. Dadi awaits Riddhima and begins the aarti. Riddhima misses Vansh. She follows Mata Rani chunri which ends up reaching Ragini’s statue.

Riddhima promises Ragini that she will get justice for her. She knows Vansh isn’t Ragini’s murderer. She tells that she will clean Vansh’s name for once and all and then start a new life with him, which will be filled with love and trust. Ragini’s statue holds an important evidence, which Riddhima gets in time. Riddhima finds a memory card there and wonders its content. She goes to Dadi and continues the aarti. She receives a warning from Anupriya again. Anupriya doesn’t want Riddhima to spy again. Riddhima wishes Vansh and her relation gets better.

Riddhima checks the memory card to find the footage of Ragini’s murder. She hides from Vansh and uses his laptop. She learns that the murderer is a left-handed person, while Vansh is right-handed. She feels so happy to know that Vansh isn’t the murderer. She wants to check the complete footage, which she had shut on seeing Vansh waking up. Vansh wants to trust her. She wants to keep his trust. Vansh and Riddhima get into a romantic moment. She asks him for his laptop once again by making an excuse. Vansh doesn’t want her to hurt his trust this time. Riddhima wants to find the evidence as soon as possible just to clear his name in Kabir’s sight. She doesn’t want to talk to Kabir about Vansh again. Will Riddhima succeed to prove him innocent and clean his name? Will Kabir’s plot to separate Vansh and Riddhima fail? Keep reading.

Reviewed Rating for this particular episode Ishq Mein Marjawan 18th October 2020 Written Update Ragini’s murder truth:3/5
This rating is solely based on the opinion of the writer. You may post your own take on the show in the comment section below.