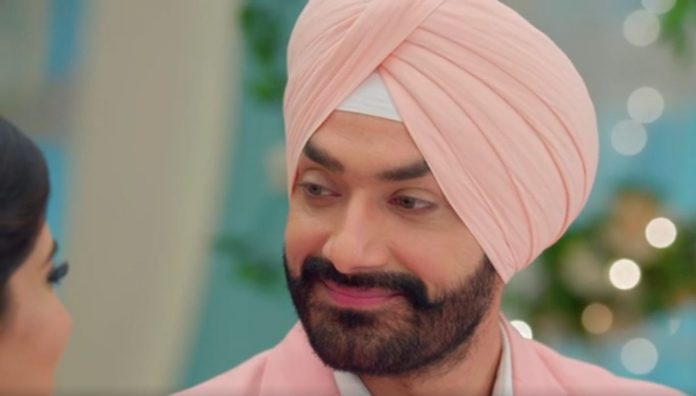 Choti Sardarni 19th October 2020 Written Update Kulwant confronted Sarabjeet and Meher have a romantic moment while they play their old age avatars. He tells that he will always take care of her. Meher cuts the cake and feeds Sarabjeet. They together have a cute moment. They wish each other happy anniversary. Manav gets depressed. He vents his anger out on Aditi. Aditi wants to know her mistake.

He wants to know his mistake in the story. Surya tries to stop Manav. Manav tells him that he has always kept his relations with full honesty, but he didn’t get anything in return. He gets missing Meher, seeing her with Sarabjeet. He recalls the times when they used to stay happy together. He can’t see her with Sarabjeet. He goes mad for her. Aditi stops him from drinking a lot. Meher finds Manav getting rude towards Aditi.

She wants to explain him once again. He tells her that she is acting happy, seeing his face in Sarabjeet’s face. He tells that she would not be happy without him. She knows he is drunk. He tells that he has got drunk to tell the truth. He just wants her. She wants him not to make things complicated. She just loves Sarabjeet now. She asks him to stop forcing her, her family will suffer if he does anything. She asks him to think of his loving family. He feels Meher is dead now, but Manav is still the same. He wants to know why does she love Sarabjeet.

She tells that she is married to Sarabjeet. Meher goes to meet Sarabjeet. Manav cries further. Sarabjeet and Meher speak to Kulwant. He asks Kulwant to give him something. He is asking for the first time. She agrees to give him whatever he asks for. He wants her to get arrested. She acts innocent. She asks her crime. He confronts her for killing Manav. Kulwant lies to him that she didn’t kill Manav, he was troubling her. Meher wants her to stop acting innocent. She tells that she has told the complete incident to Sarabjeet.

Kulwant admits that she has killed Manav for the sake of Meher’s betterment. She tells that she has done everything for her children. She asks Sarabjeet to be in her place and see. He tells her that he will never commit any crime, not even for the sake of his children. He asks her to surrender herself, else he will get her arrested by calling the police. She tells him that the case is old, she didn’t leave any proof behind. She tells that she has a proof of her innocence. She asks him to come with her, she will tell him the proof of her innocence. She goes to tell her sons.

She tells them that Sarabjeet is chasing them for Manav’s case. Kulwant goes to Manav for a talk. She asks him to come along for a talk. She lies that Meher and Sarabjeet have called him. Sarabjeet gives a chance to Kulwant. Meher thinks what proof does she have. Kulwant asks Sarabjeet to ask Vikram about her.

She tells that Vikram was investigating the case, even he couldn’t find anything against her. She wants him to tell them that Manav is a big blackmailer, it was his fault, he is alive and staying away from their lives, somewhere in Banaras. She takes advantage of the fact that Vikram will never admit his identity. Vikram tells them that there is no proof against Kulwant. He gives her a clean chit. He is helpless. Kulwant and her sons lie to Sarabjeet. Meher has told about Manav to Sarabjeet. He believes her blindly. He understands that Kulwant and her sons are surely cooking up a story.

Reviewed Rating for this particular episode Choti Sardarni 19th October 2020 Written Update Kulwant confronted:5/5
This rating is solely based on the opinion of the writer. You may post your own take on the show in the comment section below.